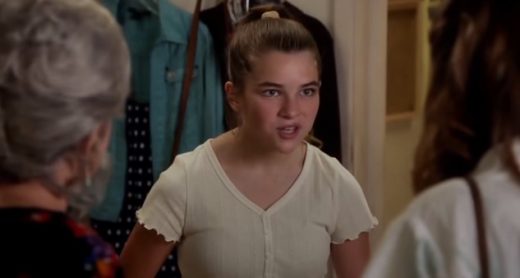 Singer, songwriter, dancer and choreographer Paula Abdul’s ‘Straight Up‘ was one of the songs played on the soundtrack of last night’s episode of Young Sheldon on CBS — Young Sheldon, Season 5, Episode 13, “A Lot of Band-Aids and the Cooper Surrender“.

The song was heard as Missy is in the bathroom at school changing into the clothes she wants to wear.


Paula Abdul’s ‘Straight Up‘ was the track that catapulted her to stardom.

It was the third single from her debut studio album Forever Your Girl, which came out in 1988 via the Virgin record label.

After lukewarm reaction to the first two singles from the album, ‘Straight Up‘ ended up at #1 on the Billboard Hot 100 chart, charted on three other American charts including at #1 on the Hot Dance Singles Sales chart, and then went on to chart in 15 other countries.

To this day, ‘Straight Up‘ is still Abdul’s biggest hit, yet it was the song her record company didn’t want her to record.

The song’s official music video was also massively successful for the American singer and dancer.

Shot in black and white, it started with Abdul doing an extensive tap dance routine then morphed into a dance video featuring the singer and then popular talk show host Arsenio Hall.

Listen to Paula Abdul’s ‘Straight Up‘ from Young Sheldon in that video, and on her debut studio album.

While I’m not sure the song stands up more than 30 years after its release, it definitely still makes you want to tap your feet and dance.