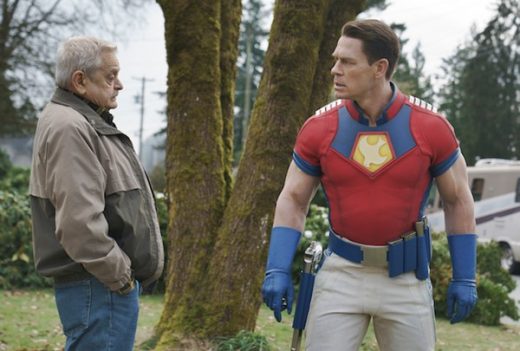 Glam metal band Pretty Boy Floyd’s ‘I Wanna Be With You‘ was one of the tracks played on the soundtrack of the superhero series Peacemaker this week — Peacemaker, Season 1, Episode 4, “Chapter 04: The Choad Less Traveled“.

The song was playing as Vigilante (aka Adrian) drives Peacemaker (aka Chris) to his Dad’s house.


Pretty Boy Floyd’s ‘I Wanna Be With You‘ is from the band’s debut studio album Leather Boyz With Electric Toyz, which came out on the MCA Records label at the end of 1989.

The album went on to hit #130 on the Billboard 200 chart, and to make ‘I Wanna Be With You’ one of Pretty Boy Floyd’s most successful releases.

Pretty Boy Floyd has been together since 1987 and, minus a year’s break up from 1994-1995, is still together today. Their last release was their 2017 album Public Enemies, with the band’s Stray Bullet compilation album following in 2019.

Listen to Pretty Boy Floyd’s ‘I Wanna Be With You‘ from last night’s Peacemaker on the band’s Leather Boyz With Electric Toyz album, and in the video.