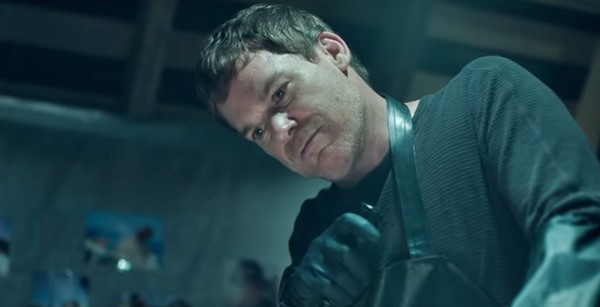 When you heard Princess Goes to the Butterfly Museum’s ‘Ketamine‘ playing over the end credits of last night’s Dexter: New Blood — Dexter: New Blood, Season 1, Episode 5, “Runaway” — you might not have known why it was so cool to hear the track on that show.

After all, the fabulously-named indie supergroup isn’t a household name for many. Although, with the superb alternative rock music they produce, they really should be.

Be familiar with Princess Goes to the Butterfly Museum, though, and you will know the three-member band features Blondie’s Matt Katz-Bohen, The Wallflowers’ Peter Yanowitz and, of course, lead singer Michael C. Hall (aka Dexter himself).

Princess Goes to the Butterfly Museum’s ‘Ketamine‘ is the band’s first single.  It was written by Hall, and is about the experience of taking ketamine while in therapy.

It also came with an official music video that is as strange as you might expect if you listen to the lyrics of the song.

Listen to Princess Goes to the Butterfly Museum’s ‘Ketamine‘ from last night’s Dexter: New Blood in that video, and on the band’s debut EP.

The band themselves is in the midst of a short UK/Ireland tour, with three more concerts still to play this week.