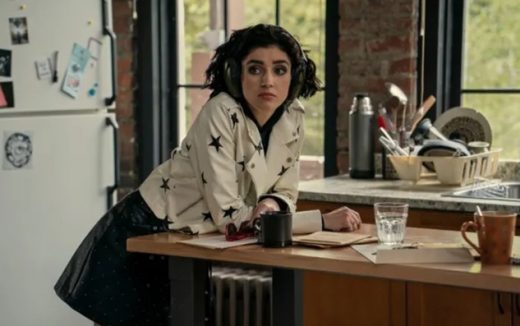 American pop rock Pvris’ ‘Monster‘ was played on the first season of the new Netflix series The Imperfects this week — The Imperfects, Season 1, Episode 2, “Doug of the Dead“.

It was a non-album single that was released by the indie pop rock group in 2021 on the Warner Records label, but it unfortunately did not chart.


The song’s music video features Pvris’ lead singer Lynn Gunn at the top of a pile of men all gyrating around and grabbing hold of her, as they are all illuminated by a black and white backdrop of constantly changing images.

Gunn herself said about Pvris’ ‘Monster‘:

It is a song about reckoning with outside opinions and expectations put upon oneself. It can be easy to take on the weight of negative situations/opinions, this is about the struggle of releasing those inhibitions and internalizations and returning back to yourself.

Pvris itself is currently lead singer, guitar and drummer Lynn Gunn (aka Lyndsey Gunnulfsen), and bassist and keyboardist Brian MacDonald.

Listen to Pvris’ ‘Monster‘ from the new sci-fi series The Imperfects in the song’s music video, and on the Spotify player.

You can also listen to other tracks from The Imperfects soundtrack here on Leo Sigh.