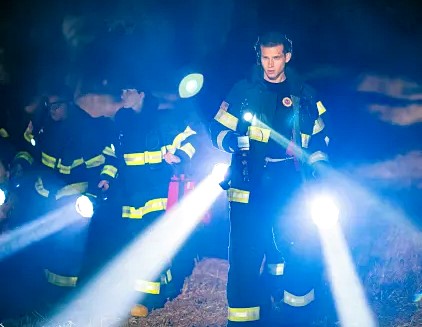 British rock band Radiohead’s ‘Everything in Its Right Place‘ was one of the songs played on the 9-1-1 soundtrack last night — 9-1-1, Season 5, Episode 7, “Ghost Stories“.

The song was played as Harry goes to the house where he was kidnapped, but then falls and hurts himself.

Radiohead’s ‘Everything in Its Right Place‘ is the opening song on the English rock band’s hit album Kid A — the band’s fourth studio album which was released in 2000.

‘Everything in Its Right Place‘ was not initially popular with many fans, as they hated that the track wasn’t the typical rock song they were used to hearing from the band.

The use of the synthesizer and the vocals being digitally altered was also generally denigrated as “weird” and “horrible”.

In later years, however, it was named as one of Radiohead‘s best songs, and nowadays is thought of as a classic example of a rock band refusing to continue to do the ‘same old same old’, when that wasn’t making any of them feel musically and artistically fulfilled or happy.

Listen to Radiohead’s ‘Everything in Its Right Place‘ as played on last night’s 9-1-1 on the band’s Kid A album, and in the video below.

The show continues to include superb contemporary songs on its soundtrack, even five seasons in.