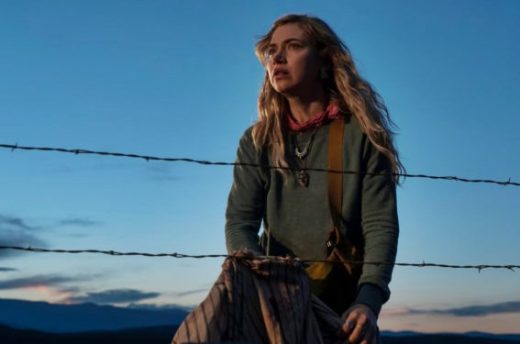 That fabulous song from Robert Plant and Alison Krauss, ‘Sister Rosetta Goes Before Us‘, was played on this week’s episode of the sci-fi thriller Outer Range last night — Outer Range, Season 1, Episode 6, “The Family“.

The melancholic song was played as Royal is torching Autum’s campsite and destroying all her belongings.


Robert Plant and Alison Krauss’ ‘Sister Rosetta Goes Before Us‘ is from the pair’s Americana collaboration album Raising Sand, which came out in 2007 on the Rounder Records label.

The album spawned three albums, was placed on several major critics’ Best Albums of the Year lists, and was a big hit on the charts around the world.

It charted in 16 countries, with its highest charting at #1 on the Billboard Top Rock Albums chart.

In 2009, the album also won a Grammy Award for Album of the Year, as well as four other Grammy Awards that year.

The title of ‘Sister Rosetta Goes Before Us‘ and its lyrics

were written about Sister Rosetta Tharpe, a now iconic blues, gospel and R&B singer and guitarist from the 1930s and 40s.

Listen to Robert Plant and Alison Krauss’ ‘Sister Rosetta Goes Before Us‘ as heard on Outer Range this week in the video, and on their Raising Sand album.