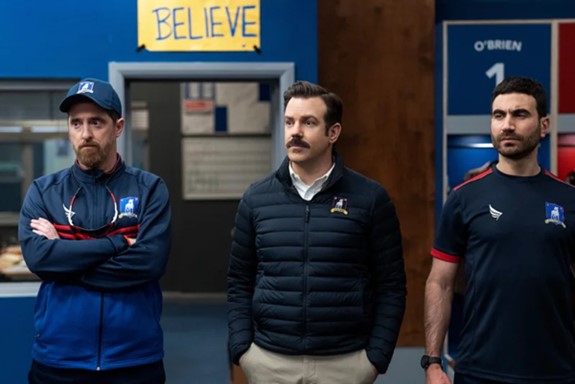 American hip hop group Run the Jewels’ ‘yankee and the brave (ep.4)‘ was one of the tracks featured on the season finale of the hit show Ted Lasso last night — Ted Lasso, Season 2, Episode 12, “Inverting the Pyramid of Success“.

The song was heard as we see Rupert whispering in now West Ham head coach Nate’s ear during the practice session.


Run the Jewels’ ‘yankee and the brave (ep.4)‘ is the first track from the rap band’s Run The Jewels 4 album, released in 2020 via the Jewels‘ own Jewel Runners imprint and the BMG record label.

The song was the lead single from the album and, along with the entire release, was met with critical praise.

The album itself debuted at #10 on the Billboard 200 chart. It also charted in 12 other countries, with its highest showing in Scotland where it hit #3 on the Scottish Albums chart.

Run the Jewels 4 also made it big on the critics’ end of the year Best Albums of 2020 lists, arriving on more than 35 of the most popular lists.

Just like most of the songs on the album, Run the Jewels’ ‘yankee and the brave (ep.4)’ explicit lyrics only seemed to make it even more popular with fans and critics alike.

Listen to Run the Jewels’ ‘yankee and the brave (ep.4) as heard on Ted Lasso yesterday on the deluxe edition of the band’s RTJ4 album, and on the song’s animated music video.

Like all RTJ albums, you can also download RTJ4 for free from the duo’s website but, if you do, try to throw them a donation for the legal charity The Mass Defense Committee (MDC).

And, of course, listen to a lot more songs featured on Ted Lasso here.