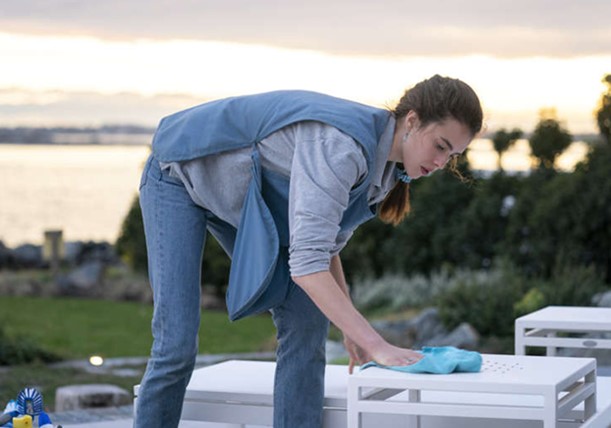 The new Netflix comedy drama Maid comes with some fun music on its soundtrack, including Salt-n-Pepa’s ‘Shoop’ which was played on Maid, Season 1, Episode 1, “Dollar Store“.

The song was played as Alex (Margaret Qualley) manages to get the cassette player to play Maddy’s (Rylea Nevaeh Whittet) favorite song.

Salt-n-Pepa’s ‘Shoop’ is from the Grammy Award nominated hip hop group’s fourth studio album Very Necessary. It was released in 1993, and soon became one of the group’s most popular releases.

The song hit #4 on the Billboard Hot 100 chart, as well as the top spot on the Hot Rap Singles chart. It also charted high in 13 other countries, including the UK, Scotland, Ireland, Canada and Australia.

‘Shoop‘ was eventually certified Gold in the United States and Silver in the UK, and has also been listed on several critics’ lists as one of the best songs of the 1990s.

Salt-n-Pepa’s ‘Shoop’ has a popular music video featuring the girls attempting to pick up guys on the boardwalk, and then back on stage dancing to the track. That video has garnered more than 87 million views on YouTube since its upload in

Listen to Salt-n-Pepa’s ‘Shoop’ as heard on Maid in that music video, and on the group’s Very Necessary album.