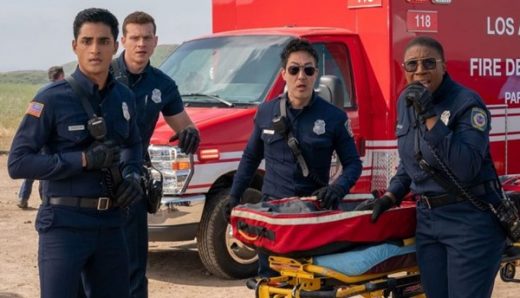 Canadian-American rock band Steppenwolf’s ‘Magic Carpet Ride‘ was that cool classic acid rock song playing on the soundtrack of the season finale of 9-1-1 this week — 9-1-1, Season 5, Episode 18, “Starting Over“.

The track was played as the followers of the wellness guru decide to turn on him, and chase him towards a ravine. He then falls into the ravine.

Steppenwolf’s ‘Magic Carpet Ride‘ was released on the band’s second studio album The Second, which came out in September, 1968 on the ABC Dunhill record label.

It was written by Steppenwolf’s lead singer John Kay and bassist Rushton Moreve.

The track was the lead single from the album, and shot up to #3 on the American charts, as well as #1 in Canada, and in the Top 20 in Australia, Germany and New Zealand.

It has since become one of Steppenwolf’s most-recognized songs.

Listen to Steppenwolf’s ‘Magic Carpet Ride‘ as heard on 9-1-1  in the video, and on the iconic band’s The Second album.