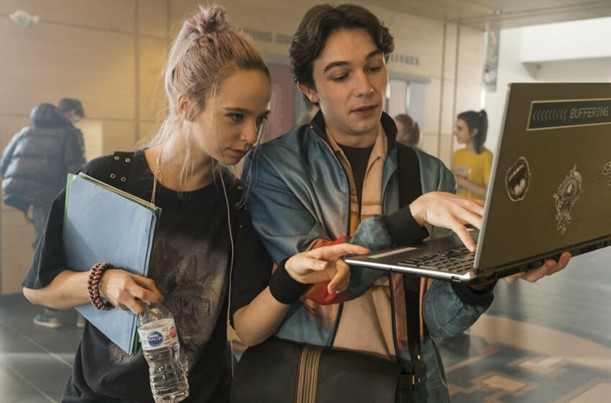 The eight-episode young adult mystery drama One of Us is Lying premiered yesterday on Peacock.

The British indie synth pop, art pop band Superorganism’s ‘Everybody Wants to be Famous‘ (The Polo & Pan Remix) was that stellar song played on its soundtrack — One of Us is Lying, Season 1, Episode 1, “Pilot“.

That song was playing as Simon is explaining school is back in session and that he has gossip for followers of the gossip blog ‘About That‘. Of course, as we now know, things do not end well for him after that.

Superorganism’s ‘Everybody Wants to be Famous‘ was first released on the band’s self-titled debut studio album, which came out in 2018. (listen to the full album below) It was the fourth single from the album.

The Polo & Pan Remix version of the song was released a year later, and is a laid-back, finger-snapping, even cooler version than the original.

Polo & Pan, by the way, are a French synth pop, electro pop music duo that not only create remixes of other people’s music, but also release their own.

To the extent that they had a top 10 hit in France earlier this year with their song ‘Ani Kuni‘ — a track based on a Native American hymn.

I am also including the music video for that song at the bottom of this article, as you really need to listen to it — it’s a freaking banger.

And, of course, listen to Superorganism’s ‘Everybody Wants to be Famous‘ from One of Us is Lying in both its original form and in the Polo & Pan Remix version below. It’s a very cool track.