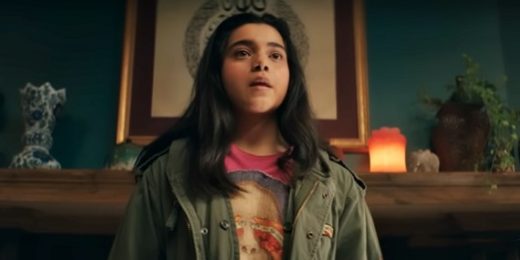 British-American hip hop group Swet Shop Boys’ ‘Anthem‘ was that cool track playing on the soundtrack of Ms. Marvel this week during the chase through the school — Ms. Marvel, Season 1, Episode 6, “No Normal“.

Swet Shop Boys’ ‘Anthem‘ was released in 2017 on the group’s six-track EP Sufi La via the indie label Customs.


The track was composed by group members/rappers Himanshu Suri (aka Heems) and Rizwan Ahmed (aka Riz MC), and talks about being non-white causing problems when it comes to opportunities offered.

In other words, white is “normal” while everything else is looked at by most of society as “other” and, in some cases, “simply not as good”.

But, what happens when that brown person suddenly becomes successful?

Are they then more accepted, more talented, more worthy than they were before? And was that success gained honestly, or did they have to edit themselves in order to succeed in a still-white-run world?

Listen to Swet Shop Boys’ ‘Anthem‘ as played on Ms. Marvel last night in the video, and on the group’s Sufi La EP.

The track itself has an addictive rhythm and thought-provoking lyrics.

As for the latest episode of the hit superhero coming-of-age series Ms. Marvel, it’s now streaming via Disney +.