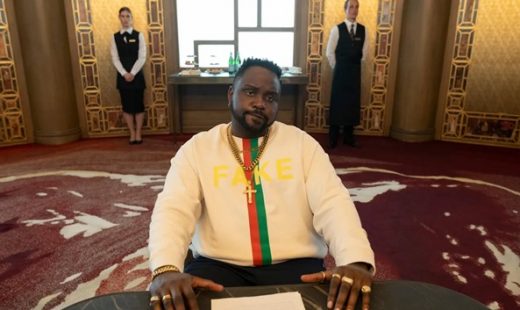 The song was played as we see the boy opening the package containing the jersey.


Teni’s ‘Fake Jersey’ was released in 2018 as a stand alone single.

It came with an official music video featuring the singer and a crowd of people on the street wearing Nike jerseys — some are fake, some are not.

The song was inspired by the release of a Nike jersey in support of the Nigerian national football team, the Super Eagles, and the fact that the jersey was quickly sold out.

To the extent that fake Nike jerseys were soon on sale all over Nigeria, as fans either couldn’t buy one of the jerseys, or couldn’t afford the high Nike price.

Teni had some comments on that.

As for Teni, aka Teniola Apata, the singer released her first single ‘Amen‘ in 2016.

Since then, she has signed with the Dr. Dolor Entertainment label, and released a slew of new singles — both solo and as a featured artist — plus several EPs.

Listen to Teni’s ‘Fake Jersey‘ from last night’s Atlanta in her music video for the song, and on the Spotify player.

The track itself is catchy and fun, with an addictive chorus and a cool beat.

Meanwhile, Season 3 of Atlanta is currently airing on FX and on Hulu.