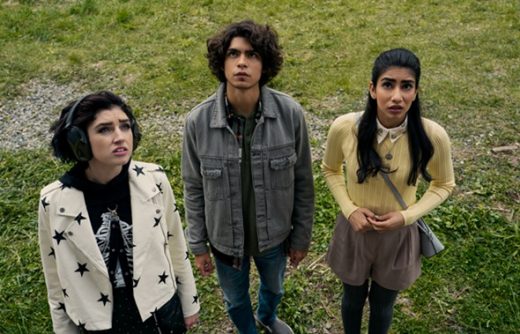 Canadian alternative rock band The Beaches’ ‘Desdemona‘ was the song playing over the end credits of The Imperfects Season 1, Episode 2, “Doug of the Dead” this week.

‘Desdemona‘ is from the Toronto-founded all-girl rock band’s 2019 EP The Professionals.


An EP that was then combined with another EP Future Lovers to become the 2022 full-length album Sisters Not Twins (The Professional Lovers Album).

The Beaches’ ‘Desdemona‘ is a catchy rock song with vocals and melody quite reminiscent of The Cranberries’ ‘Zombie‘.

In other words, incredibly cool.

Their first release — a self-titled EP — came out in 2013, with the band releasing three other EPs since then, plus a debut studio album and a large number of singles.

While always grabbing attention due to their music and their cool look, The Beaches’ popularity grew even further earlier this year when they won a Canadian Juno Award for Rock Album of the Year.

Listen to The Beaches’ ‘Desdemona‘ as heard on The Imperfects this week on the video, and on their The Professionals EP.

You can also hear more music from The Imperfects here on Leo Sigh.