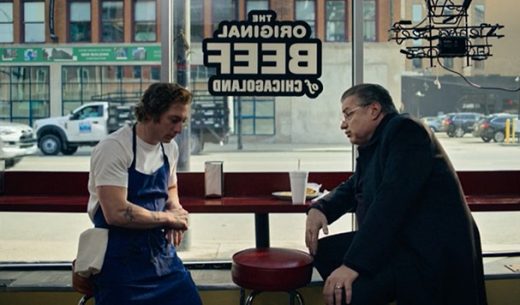 The FX on Hulu original eight-episode food drama The Bear features superb music on its soundtrack, including The Breeders’ ‘Saints‘, which was featured on The Bear, Season 1, Episode 2, “Hands” this week (and what a helluva’n episode that was, eh?)

The song was played towards the end of the episode as sandwiches are being made, as Carmy is cooking chicken in a pan on the stove, and as he tells Syd she’s hired.


The Breeders’ ‘Saints‘ was first released on the alternative rock band’s second studio album Last Splash, which came out in August, 1993 via the Elektra and 4AD record labels.

The song was then released as the third single from the album, and made it to #12 on the U.S. Alternative Airplay chart.

The ‘Saints‘ lyrics, while confusing and a  bit ‘out there’, talk about how great the arrival of summer is and how fabulous it is to go to a fair, and just wander around watching everyone having fun.

I like all the different people
I like every kind of fair
In the crowd, you bet I’ll be there!
Walkin’ around
Going nowhere
Seeing Sooey and saints at the fair

The ‘Saints‘ music video (watch below) had the band performing the song in snowy woods, and at a carnival.

Listen to The Breeders ‘Saints‘ from the superb Hulu series The Bear in that music video, and on the band’s Last Splash album.

Watch The Bear via Hulu and, if you enjoy a superb gritty drama, you really should.

Listen to more music from The Bear on Leo Sigh.