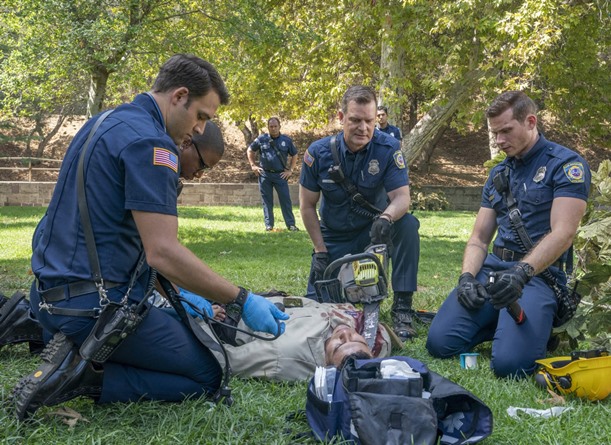 The song was played as we see a man exercising and over-exerting himself.

The Chemical Brothers’ ‘Galvanize‘ is the lead single from the band’s fifth studio album Push the Button, which was released in 2005 via the Virgin Records label.

The song was a hit for the music duo, charting at #3 on the UK Singles chart and at #1 in Greece, Ireland and Spain, as well as at #1 on the UK Dance chart.

‘Galvanize‘ came with a music video featuring three boys wearing clown face paint who head to a dance club to have fun. But, soon after dancing and getting into a ‘dance fight’, they are dragged out of the club and arrested by the police.

The Chemical Brothers‘ ‘Galvanize‘ is a pounding dance song with a Moroccan-style string sample, and repetitive lyrics. It also features the lyrics “push the button”, the title of the album it originated on.

Listen to The Chemical Brothers’ ‘Galvanize‘ as heard on 9-1-1 last night in the song’s music video, and on the British duo’s Push the Button album.