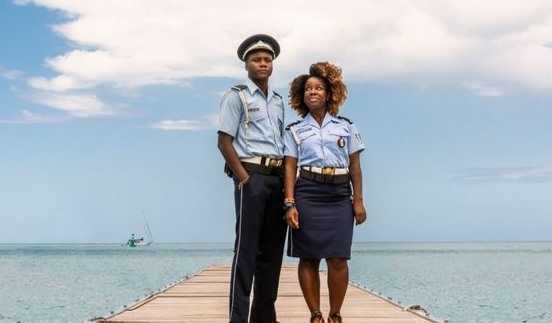 Jamaican music group The Ethopians’ ‘Feel The Spirit‘ was that fabulous classic reggae song heard on the new episode of the British-French crime drama Death in Paradise last night — Death in Paradise, Season 10, Episode 2, “I’m here about a Murder“.

The song was played during the montage as Katherine tells JP training Marion will be helpful when he becomes a father, as Neville ‘dirty fishes’ and as Florence asks Neville about him being afraid of crabs.

The Ethiopians’ ‘Feel The Spirit’ was first released on the group’s 1969 studio album Reggae Power, which was released via the British label Trojan Records.

When the group was founded in the mid-1960s, it comprised band members Leonard Dillon, Stephen Taylor and Aston Morrison.

The trio released several well-received singles and albums, but Aston Morrison soon left them as, even though The Ethiopians was becoming more and more popular, they were still not able to earn enough money to live on.

Morrison had a family, and thus decided the work was too unstable. (continue reading and listen to The Ethiopians ‘Feel The Spirit’ below…)

Listen to Mahalia Jackson’s ‘His Eye Is On The Sparrow’ from This Is Us, Season 5, Ep. 6

The Ethiopians remained as a duo for several years, with the help of temporary musicians for albums and performances when needs be. Things remained that way until Stephen Taylor was killed in a traffic accident in 1975, leaving Leonard Dillon alone.

Dillon eventually re-founded The Ethiopians with members of the Rastafarian faith. The group continued on in this form, with Dillon also concentrating on his solo work, until his death in late 2011.

The group then officially disbanded.

Listen to The Ethiopians’ ‘Feel The Spirit’ as heard on Death in Paradise in the video below.

The current season of Death in Paradise is currently airing on BBC One.