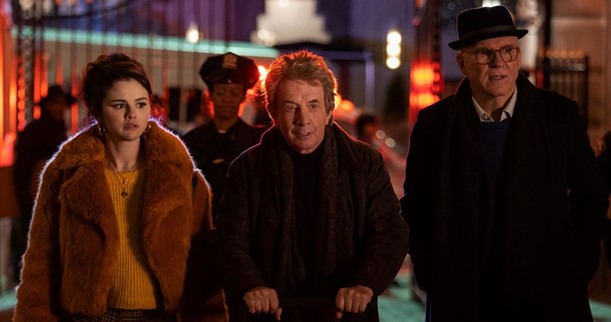 The track was played in that shocking final scene, and major cliffhanger, as the trio are led out of the Arconia in handcuffs with the building’s tenants looking on.

The Supremes’ ‘Manhattan‘ was a cover of the famous Rodgers and Hart song, and was first heard in the mid 1920s in the musical review Garrick Gaieties.

In subsequent years, the song was covered by a plethora of artists including Tony Martin, Mel Torme, Ella Fitzgerald and Dinah Washington, with The Supremes version of the song releasing in 1967 on their album The Supremes Sing Rodgers & Hart.

The song itself is about a young couple who, while they want to be able to go out together in New York, they don’t have the money to do that.

So they talk about how wonderful the cheap and often worst things about New York are while they head to the places where the city’s poorest people go.

Listen to The Supremes’ ‘Manhattan‘ as heard on the season 1 finale of Only Murders in the Building on the group’s album The Supremes Sing Rodgers & Hart, and in the YouTube video.

The song has been so popular for almost 100 years now, it has been featured on a slew of movies and TV shows, with Only Murders in the Building just the latest one.