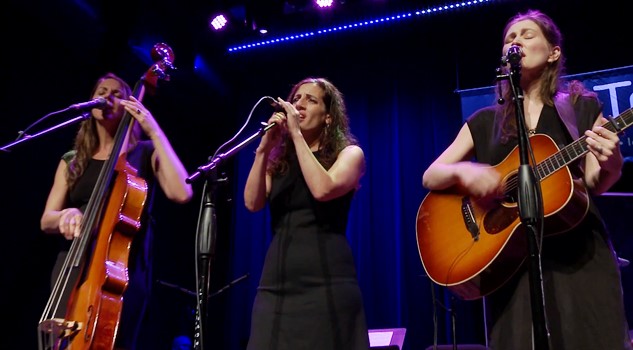 The track was played while Hilde and Matt are in the dark room developing the photos.


The Wailin’ Jennys’ ‘One Voice‘ is from the group’s debut album 40 Days, which was released in 2004 via the Winnipeg indie label Private Ear Recording.

It won the Canadian Juno Award the following year for the BestRoots & Traditional Album of the Year.

The album was the last recording on which founding band member Cara Luft appeared. She left the band a year later and went back to her solo career.

40 Days was titled in that manner as it was based on the number of days it took The Wailin’ Jennys to record and complete the album. Had it been 43 Days, that would have been the album’s title.

‘One Voice‘ was written by band member Ruth Moody, and was one of three tracks she contributed to 40 Days. The other tracks were written by the two other members of the trio — Nicky Mehta and Heather Masse — with three cover songs also appearing on the release.

Listen to The Wailin’ Jennys’ ‘One Voice’ as heard on last night’s Home Before Dark on their debut album, and in the video of a lovely band live performance of the track.

Learn more about the indie trio on the group’s website.