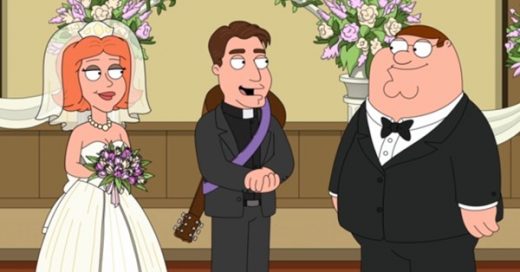 The song was heard at Alana and Peter’s wedding as the YouTube ‘guitar priest’ is serenading the guests, and as Alana gets ushered into the police car.


Third Eye Blind’s ‘Jumper‘ is from the rock band’s self-titled debut studio album, which came out in 1997 on the Elektra record label.

The song was released as the fifth single from the hit album. It was written by Third Eye Blind’s lead singer Stephan Jenkins about a high school friend of manager Eric Godtland who committed suicide as a result of being bullied because he was gay.

‘Jumper‘ charted on five different charts in the U.S., with its highest place at #2 on the Mainstream Top 40 chart, as well as hitting the Top 10 in Canada.

A music video for ‘Jumper‘ was also released although, with its theme of a guy making it with various women, it seemed to have little to do with the song’s actual theme.

Listen to Third Eye Blind’s ‘Jumper‘ as (briefly) heard on last night’s Family Guy in that video, and on the band’s debut album below.