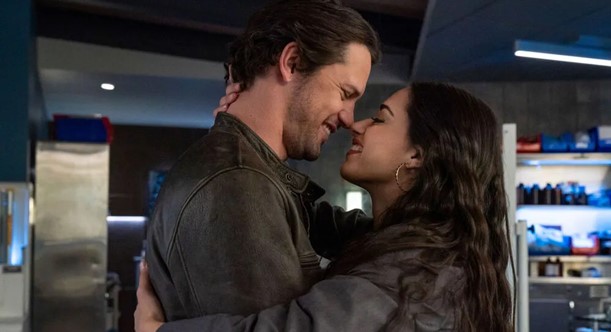 American singer and music producer Tommee Profitt’ ‘Can You Feel the Heat Now‘ (feat. Flurie) was the standout track on the soundtrack of the sci-fi drama Roswell, New Mexico last night — Roswell, New Mexico, Season 3, Episode 12, “I Ain’t Goin’ Out Like That“.

The song was self-published by the artist in 2018 on his album Cinematic Songs (Vol. 5).

It is a song that has done very well for Profitt and his long-time collaborator indie singer songwriter Fleurie, as it has also been featured on shows as diverse as Marvel’s Cloak & Dagger, The Bold Type, and Station 19.

Profitt himself has had an enormous number of songs licensed for play on hit TV shows and movies in the last two or three years, with tracks appearing on everything from Nancy Drew, Batwoman, All American, Power, Prison Break and Charmed to The Enemy Within, The Good Doctor and The Titan Games.

With many of his songs being cinematic in feel and sound, it probably isn’t surprising they suit exactly what show music supervisors are looking for when they search for songs to musically illustrate a scene.

Listen to Tommee Profitt’ ‘Can You Feel the Heat Now‘ (feat. Flurie) as heard on the first part of the two-part season finale of Roswell, New Mexico last night on Profitt’s Cinematic Songs (Vol. 5) album, and in the illustrated video.