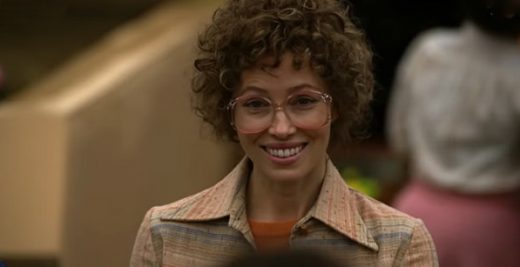 Tony Orlando and Dawn’s ‘Tie a Yellow Ribbon Round the Ole Oak Tree‘ was one of the cool 1970s tracks played on the new Hulu crime drama series Candy this week — Candy, Season 1, Episode 3, “Overkill“.

The song was played as Candy is throwing Betty’s baby shower, and as she tells Sherry she is having an affair with Allan.


Tony Orlando and Dawn’s ‘Tie a Yellow Ribbon Round the Ole Oak Tree‘ came out in 1973, and was an immediate worldwide hit for the American music group.

It went on to chart at #1 in 10 countries, including the U.S., the UK, Australia and New Zealand, and remained at #1 on the Billboard Hot 100 for four weeks.

After its release, ‘Tie a Yellow Ribbon Round the Ole Oak Tree‘ became one of the group’s signature songs, and has since been named as one of the best songs ever released.

The lyrics of the song are a bit of a heart-tugger as well, as they tell the story of a man who has spent time in prison and isn’t sure if he will be welcomed back home by his wife.

So he sends her a letter telling her to tie a ribbon around the tree in her yard if she wants him to come home.

If he passes on the bus and a ribbon isn’t there, he won’t get off the bus. If it is, he will know she still loves him.

But, when the bus passes, and he is too afraid to look, the bus driver tells him there are 100 yellow ribbons festooning the tree.

Listen to Tony Orlando and Dawn’s ‘Tie a Yellow Ribbon Round the Ole Oak Tree‘ in the video, and on the group’s Legends album.