Swedish sleaze metal band Vains of Jenna disbanded in 2012, but that hasn’t stopped their music from being picked up for hit TV shows.

Like Vains of Janna’s ‘Enemy in Me‘, for instance, which was used as the final song on this week’s episode of Peacemaker as it played over the end credits — Peacemaker, Season 1, Episode 4, “Chapter 04: The Choad Less Traveled“.


Vains of Janna’s ‘Enemy in Me’ was a song from the metal band’s sophomore studio album  The Art of Telling Lies. The 10-track album came out in 2009 via RLS/Raw Noise Records. 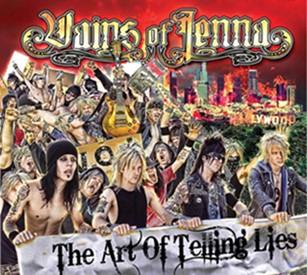 Not long after the album release, lead vocalist Lizzy DeVine left the band.

He was replaced with Jesse Forte, but Forte left the band around 18 months later and, at that point, Vains of Janna decided to call it a day.

Listen to Vains of Janna’s ‘Enemy in Me‘ as heard on Peacemaker in both the band’s music video for the track, and on their The Art of Telling Lies album.

The song itself is actually a pretty catchy track, especially the chorus, with a stellar guitar interlude, and don’t even get me started on Lizzy’s vocals.

A pity all that ended, eh?

Listen to and learn more about song’s from this week’s episode of Peacemaker on Leo Sigh.