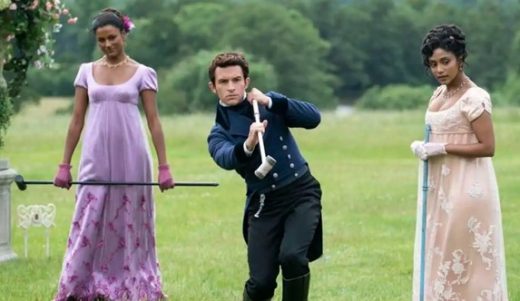 The Los Angeles based music group Vitamin String Quartet’s ‘Stay Away‘ was one of several pieces they had featured on the new season of the period drama Bridgerton this week — Bridgerton, Season 2, Episode 1, “Capital R Rake“.

The gorgeously frantic cello driven piece was the piece of music playing as Anthony begins his search for a wife and so is interviewing prospective fiancées.

Vitamin String Quartet’s ‘Stay Away‘ was released in 2010 and is an instrumental cover of a Nirvana song from that band’s iconic album Nevermind.


It is one of literally thousands of instrumental covers Vitamin String Quartet has released of other popular band’s and singer’s music over the last decade or more.

Vitamin String Quartet, by the way, isn’t the same group of musicians on every release.

Instead, it is a revolving door of musicians and producers that work on different string quartet projects through the LA based indie record company CMH Label Group.

Much of it created with an eye to having their music featured on popular TV series and movies.

To that end, Vitamin String Quartet’s music has shown up on shows as different as House M.D., The Vampire Diaries, Westworld, Modern Family, Gossip Girl, Shameless and Pretty Little Liars.

Listen to Vitamin String Quartet’s ‘Stay Away‘, one of their many instrumental covers featured on Bridgerton, in the video and on the Spotify player below.

You can also hear the original Nirvana song below that.