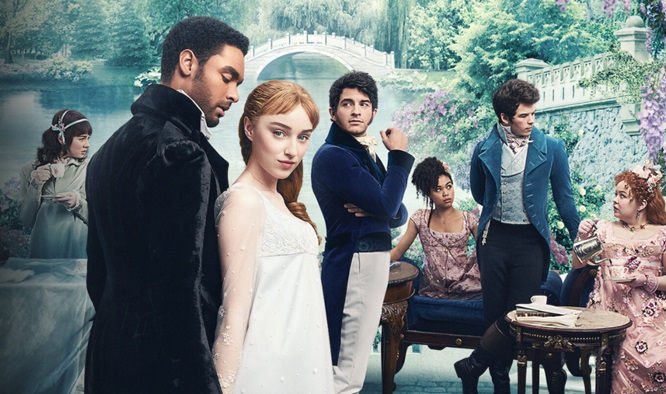 The new British period drama Bridgerton began streaming on Netflix yesterday and, already, is seeing high approval ratings as people around the world began binge-watching it.

Tracks like Vitamin String Quartet’s ‘thank u, next‘, which was played on Bridgerton, Season 1, Episode 1, “Diamond of the First Water” as Daphne enters the dance and begins to walk around.

Vitamin String Quartet is an odd thing, however, as it is not a set group of musicians. Instead, it is an ever flowing group of arrangers, producers, and string players that work on different projects.

Including on this Bridgerton project.

In other words, a bit of a conveyor belt of classical-infused music mixed with rock and pop music that, to date, has produced more than 400 albums (yep, 400!) — predominantly of covers of songs by artists like The Smashing Pumpkins, Radiohead, Linkin Park, Coldplay, The Beatles, Michael Jackson, Adele and Lady Gaga.

Vitamin String Quartet’s ‘thank u, next‘, of course, is a pretty instrumental cover of Ariana Grande’s hit song.

And, to a very very small extent, Vitamin String Quartet’s sound reminds me of an Austrian jazz-classical crossover band I religiously follow.

Except the Austrian band is always the same members, their music has much more life and heart, and more jazz, and they produce an extremely limited number of superb albums of self-written music — not cookie-cutter classical/rock covers/elevator music of other people’s work, à la the VSQ project.

That group’s name is Tuesday Microgrooves and, I guarantee, if you like VSQ, you will like them much much more. (continue reading and listen to Vitamin String Quartet’s ‘thank u, next‘ below…)

Listen to Vitamin String Quartet’s ‘thank u, next‘ from Bridgerton in the video below. As background classically-infused music goes, it’s fine.

You can also listen to Tuesday Microgrooves’ latest album Bigger Than Us below that.

It is an album I have listened to over 300 times since its release earlier this year. And no, it never gets old.

Bridgerton is based on Julia Quinn’s best-selling novels, and is currently streaming on Netflix.