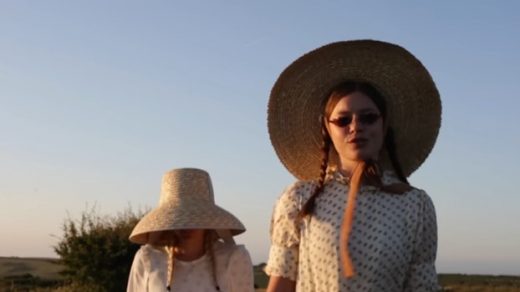 The song was heard as Becka is ecstatic after she gets a date with Matthew.

It was released in 2021 as the lead single from their self-titled debut album, and hit #13 on the UK’s Indie chart, as well as #21 on the U.S. Rock and Alternative Airplay chart.

The track was then re-released on the band’s debut studio album the following year. That album, which was well-received by critics, hit the top spot on charts in the UK and Australia.

The spoken word ‘Chaise Lounge’ also came with a video of the duo — lead singer and guitarist Rhian Teasdale and guitarist and backing vocalist Hester Chambers — wearing Victorian-style summer clothes and big hats as they walk around the countryside.

Listen to Wet Leg’s ‘Chaise Lounge‘ as heard on Bad Sisters this week. It’s not my cup of tea, but it might be yours.

Learn more about Wet Leg on their official website.