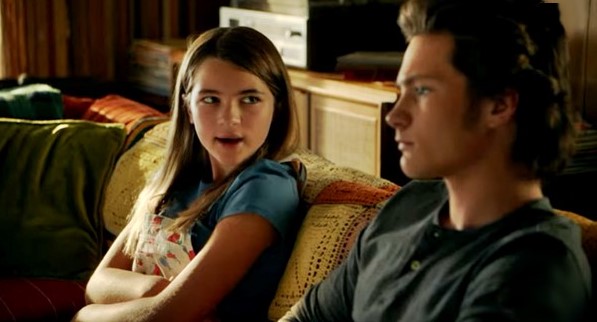 The song was playing as George switches off the religious movie, and he and Missy start watching Young MC’s ‘Bust a Move’ music video.

It ends as George talks about why he believes in God and points at the music video, “See that girl dancing in those shorts? There’s a God”.

Young MC’s ‘Bust a Move‘ is one of the rapper’s biggest hits.

Released in 1989 via the Delicious Vinyl indie record label as the third single from his debut album Stone Cold Rhymin’,  ‘Bust a Move‘ hit #7 on the Billboard Hot 100 chart.

The song also charted high in six other countries including his native UK.

The track eventually won Young MC a Grammy Award for Best Rap Performance, and was ultimately certified Platinum in the United States.

Young MC’s album Stone Cold Rhymin’, which was produced by Quincy Jones and The Dust Brothers, was also an enormous success for the then-22-year-old rapper and hip hop artist.

The album hit the #9 spot on the Top Pop Albums chart in the U.S., and went on to be critically acclaimed by a number of entertainment media.

To this day, it remains one of the rapper’s most successful ventures.

Listen to Young MC’s ‘Bust a Move‘ as heard on last night’s Young Sheldon in the song’s music video that played on the episode, and on the Deluxe Edition of the rapper’s debut album.