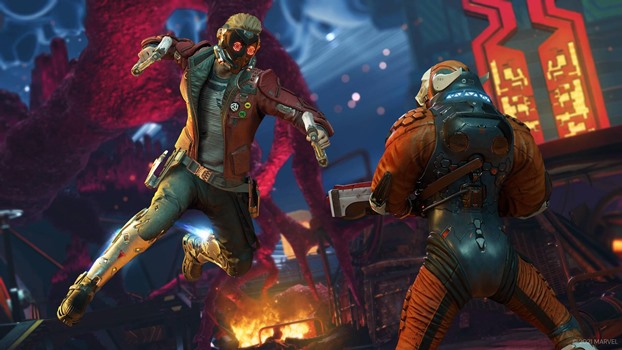 As a music journalist, I could not be happier with the soundtrack for the upcoming Marvel’s Guardians of the Galaxy video game.

I mean, not only is this thing massive, with its huge list of licensed 1980s hits, hell, as a radio DJ back in the 80s in Cincinnati, Ohio myself, I played most of them on my shows.

Talk about bringing back fabulous memories for me. (But can I also say, “Jesus, this thing must have cost developer Eidos-Montreal a helluva lot of money”, as we’re not talking no name bands here).

The full list for the songs on the Marvel’s Guardians of the Galaxy game soundtrack looks like this:

The Marvel’s Guardians of the Galaxy game soundtrack isn’t just a nice musical backdrop to your gameplay either, as the songs can be used in combat to give your fellow Guardians a buff.

That feature alone could help you win.

If you just love the songs too, you’ll have plenty of chances to listen to them in game, including while you’re hanging out on the Milano and feel like firing up the jukebox.

Or, you can listen to all the songs on the soundtrack now via these streaming services.