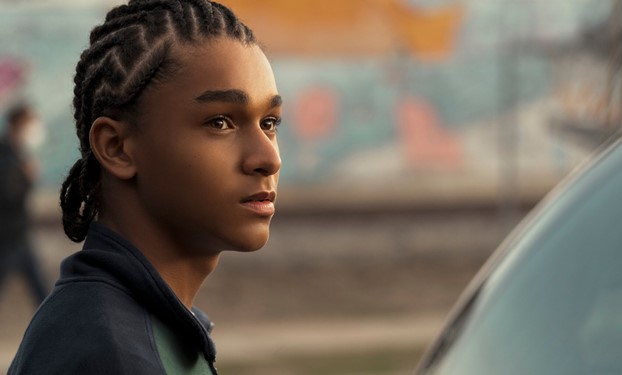 If you are looking for that cool track from the Colin in Black and White trailer, look no further than Nas and Hit-Boy’s ‘Ultra Black‘, as it was the jazz-infused, rap song playing.

Colin in Black and White is the new Netflix sports-themed mini-series that tells the story of American footballer Colin Kaepernick, and his experiences growing up long before he became world famous for ‘taking the knee’.

Experiences that made him the civil rights ‘activist’ (I hate that term) he has become today.

Kaepernick himself is the narrator of the series, while Jaden Michael stars as a teenage Colin Kaepernick, with Mary-Louise Parker and Nick Offerman as his white, middle-class parents.

Nas and Hit-Boy’s ‘Ultra Black‘ was released in August, 2020 as the lead single from King’s Disease — Nas’s thirteenth studio album. Yep, he really is that prolific.

The track is a ‘Black Pride’ song that, Nas says, was written to spread love instead of hate.

Listen to Nas and Hit-Boy’s ‘Ultra Black‘ in the song’s official music video, and on Nas’s King’s Disease album.

You can also watch the official Colin in Black and White trailer down there as well. And, oh yes, the show itself is excellent. You really should watch it.