Although I haven’t lived in Barnoldswick, England since I was 20 years old, (and man, that’s a long time ago!) I am still a Barnoldswick girl and a Lancashire lass at heart.

So, when I saw a Facebook post from a page I follow called Barnoldwick and Barlickers Then and Now with a link to a music video from a local musician, of course, I clicked on that link.

The musician’s name is One Cure For Man, aka indie singer, songwriter and artist James Parkinson, and the post caught my eye because it was written by his mother.

A mother who was so very very proud of her son.

It also had a striking photograph of a clown.

But, a click on a video link does not usually mean much to me.

After all, Leo Sigh receives so many requests from independent musicians to check out their work and sadly, much of the time, I am seriously underwhelmed when I do.

That was not the case with One Cure For Man, though, as the official video for his new single ‘The Haunted‘ is beautiful.

The track itself has a gorgeous melody, the piano is hella hella clean, the drums are slamming good and wonderfully tight (and yes, that’s his brother Ben Parkinson creating that rocking sound), Parkinson’s vocals are powerful, soaring and rich, the man plays a damn mean guitar (love that bridge!) and the sentiment behind the song is something we should all be paying more attention to. 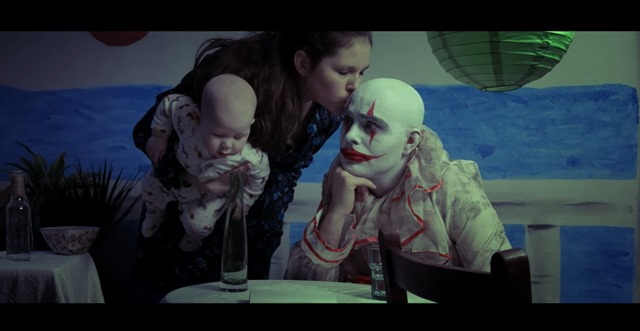 As Parkinson himself explains on One Cure For Man’s website, the song is:

“a collection of thoughts on how today’s ever-changing world of social media creates a false and damaging perception of the lives around us. Many of us find ourselves feeling envy at what we see through the lens of our friends’ social media presence, only to learn much later about the suffering behind the smiles. In some cases, far too late.”‘

‘The Haunted‘ is inspired by and dedicated to Parkinson’s late friend Ian Seddon — a local teacher and fellow music and arts lover who committed suicide last year after struggling with mental illness for some time.

A man whom James Parkinson describes as having “an incredibly colourful and vivacious character, and a love for music, art, and films from the highest arthouse to the most popular of pop culture. ”

That someone who sounded so energetic, alive and in love with life felt the need to take his own life makes One Cure For Man’s ‘The Haunted‘ even more touching and poignant.

Who is One Cure For Man?

As for One Cure For Man, as I mentioned above, it is the music project of Northern England singer, songwriter and artist James Parkinson.

Starting out as a band and moving on later to become a solo music project, One Cure For Man has released four solo albums so far.

The latest, This Eternal Life, hit shelves in 2019 and is currently the one playing in my headphones.

Because I figured, if I liked the first song I’ve ever heard from this guy this much, I am probably going to like a lot more.

Because this dude is as much of a storyteller telling intimate and important stories with his music as he is a musician.

And, God knows, in this too often shitty world we need a lot more folks like that.

One Cure For Man’s ‘The Haunted‘ music video

Watch One Cure For Man’s ‘The Haunted‘ official music video below.

The video is beautifully filmed and edited by Jason Marshall of iameyevideo, the video concept was created by both Parkinson and James Marshall.

You can buy his music on on all the regular digital platforms and, of course, listen to his latest album in the Spotify widget below, and stream the rest of his releases on Spotify.

I recommend that you do.

Finally, just in case you miss it in the YouTube notes, James Parkinson wants you to remember:

75% of all suicides are male. Don’t suffer alone, please reach out for help if you need it: