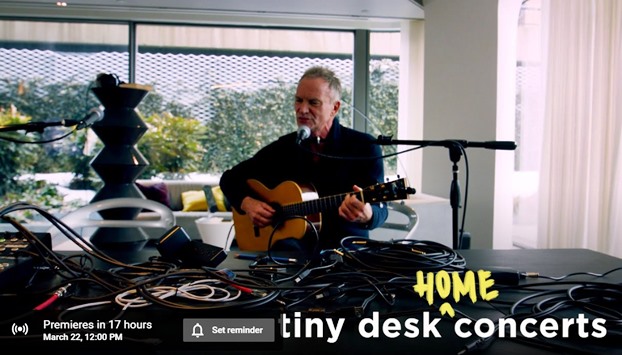 The concert will air via the NPR Music YouTube video channel and, if you know anything about Sting, it will be well worth a watch.

That concert was such a superb one, and earned the NPR Music channel more than 25 million views, so it is no surprise they have asked him back to do another one.

Of course, considering the now-69-year-old musician never disappoints in any concert he puts on, tomorrow’s Sting Tiny Desk (Home) Concert should be just as spectacular.

Even if Shaggy isn’t around this time.

Mark your calendars and head here to check him out although, if you can’t get there on time, NPR Music will likely have the show available to watch any time for pretty much as long as their channel is still active.

And yes, we are all hoping he sings/plays ‘Fields of Gold‘, aren’t you?