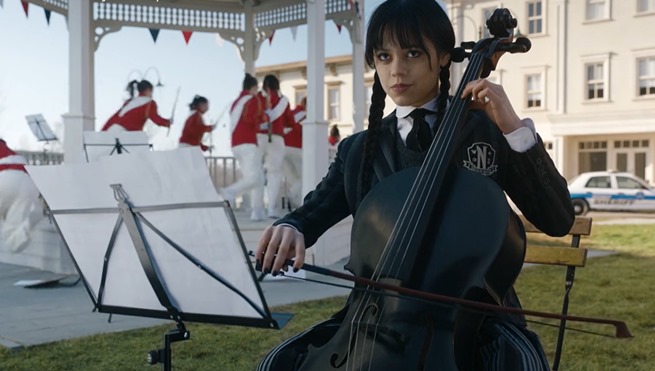 Not only does the new Netflix teen drama Wednesday feature some stellar contemporary music, there are also several classical pieces on its sountrack.

Including Wednesday’s playing of Vivaldi’s The Four Seasons: Winter: I. Allegro Non Molto, which we heard on Wednesday, Season 1, Episode 3, “Friend or Woe” as our girl plays the cello at the town square, while the crowd is running away screaming.


A piece of music that even I, someone who knows literally nothing about classical music, immediately recognized as one of my favorite classical pieces.

What is The Four Seasons: Winter: I. Allegro Non Molto?

Italian composer Vivaldi’s The Four Seasons: Winter: I. Allegro Non Molto is one of four violin concertos that were written around 1718, so more than four hundred years ago, but is a piece of music that has more than stood the test of time.

In fact, when most people think of Vivaldi, The Four Seasons is likely to be the first piece of music he composed that comes to mind.

Likely because of the imagery all four concertos still bring up — singing birds, storms, fires, running creeks and even drunken dancers — the things Vivaldi wanted to express when he wrote the four violin pieces.

Italian-British violinist Alfredo Campoli’s from 1938 is thought to be the first recording of The Four Seasons, but it has been recorded thousands of times by a huge number of classical musicians since then, with more still being released every year.

All four violin pieces have been featured in hundreds of TV series and movies over the last few decades, with Wednesday’s performance of Winter being just one of them.

Listen to Vivaldi’s The Four Seasons: Winter: I. Allegro Non Molto as heard on Episode 3 of Wednesday this week on Wiener Philharmoniker’s (Vienna Philharmonic) Vivaldi: Die vier Jahreszeiten album, and in the video.

RELATED: Listen to more music from Wednesday on Leo Sigh