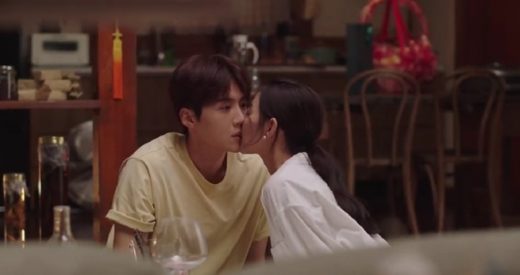 The ending of Hometown Cha Cha Cha Episode 5 is not only one of the best endings of the entire Korean romantic comedy drama series, it also features three of the best songs on its soundtrack played back-to-back.

Including CHEEZE’s ‘My Romance‘, that sweet, mellow song that was heard as Hye-jin remembers kissing Chief Hong when she was at his house and they were both drunk.


A kiss that, it seems, Chief Hong returned.

CHEEZE’s ‘My Romance’ was written and recorded specifically for the Hometown Cha Cha Cha soundtrack, and eventually made it to #154 on the South Korean Circle Digital Chart — a chart that ranks the top 200 singles in the country that week.

It is one of several songs CHEEZE, aka Im Hye-kyung (aka 임혜경 in Korean), has released for Korean dramas, including songs on the soundtracks of Suspicious Partner, Rich Man, Encounter and It’s Okay to Not Be Okay.

And yes, I have listened to several of them and, while they are all lovely, I have to admit CHEEZE’s ‘My Romance’, which shows up on several episodes of Hometown Cha Cha Cha and not just at the end of Episode 5, is her best.

Listen to CHEEZE’s ‘My Romance‘, the song playing as Hye-jin remembers kissing Chief Hong during the beach scene at the end of Hometown Cha Cha Cha Episode 5, on the show’s soundtrack and in the video.

There is also a lovely live performance CHEEZE gave of ‘My Romance‘ down below you really should listen to, as that’s someone who is just as talented live as she is recorded.

And, of course, watch (or rewatch) Hometown Cha Cha Cha via Netflix now.

I am currently on my third re-watch in as many weeks, it’s that superb.

You can also hear and learn about more songs from the hit romantic comedy here on Leo Sigh.