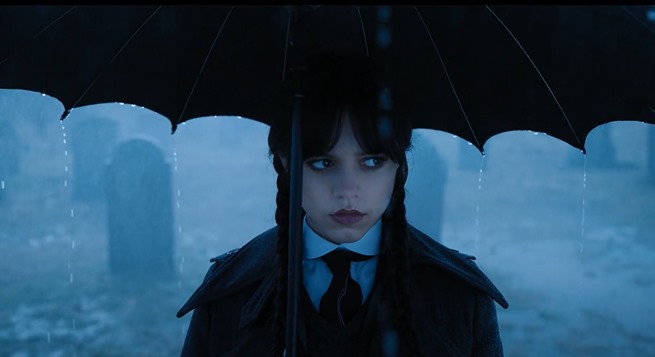 That melancholic song playing at the mayor’s funeral on Wednesday, Episode 7, ” If You Don’t Woe Me by Now” was American singer songwriter Wolf Larsen’s ‘If I Be Wrong‘.

The track is from the singer songwriter’s Quiet at the Kitchen Door, which came out in early December, 2011, and is a standout for its mesmerizing vocals and powerful strings.


To me, it seems to be a song that one of the Wednesday music supervisors probably heard years ago, and then kept on the backburner for just the right TV show to feature it in.

And then, along came Wednesday, a show that has featured superb contemporary songs on its soundtrack, and this one fit right in.

‘If I Be Wrong‘ is a song about the self-doubt of someone who may just believe the terrible things others have said about her. But, even so, is still someone willing to take a chance on herself and the person she loves:

What if I’m wrong, what if I’ve lied
What if I’ve dragged you here to my own dark night
And what if I know, what if I see
There is a crack run right down the front of me

Listen to Wolf Larsen’s ‘If I Be Wrong‘ as heard playing during the mayor’s funeral on Wednesday, Episode 7 on the singer’s Quiet at the Kitchen Door album, and in the video.

You can hear more songs from the Wednesday soundtrack on Leo Sigh and, of course, watch the creepy show via Netflix.