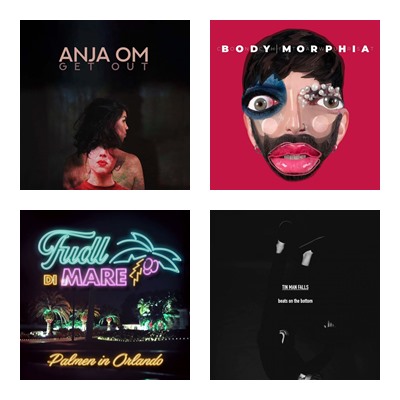 I have just spent months in the United States dealing with family issues, so have to admit I’ve missed most of what has been going on in the Austrian music industry this year.

A music industry that gets little press outside Austria — sadly, as there are superb contemporary artists that would be hella big, if they weren’t from teeny tiny Austria, of course.

A quite eclectic record label it seems, considering the artists it is currently publishing:

Conchita Wurst (of course), a Vienna-based American electronic music artist called Tin Man Falls, Anja Om, one of Conchita’s backing singers and a talented solo artist in her own right, and the strangely-named girl group Fudl di Mare, a group that calls itself ‘schlager trash’ — you know the less refined version of that quintessential Germanic music genre nobody outside Europe seems to get (although, weirdly, from the few artists I’ve heard, I like it), and, if I’m not mistaken, also includes a couple of Wurst backing singers.

Yes, a mostly incestuous group of musicians considering most, if not all, have a connection with Conchita Wurst but, if you know anything about the name of the music game in Austria, you will know incest is right there at the top.

Then again, I don’t have much of a problem with it because, when you are creating music in Austria — a country whose music industry is largely controlled by powerful entities like ORF, and where indie artists struggle more than anywhere else I have lived to get any traction at all, if your friends won’t help you get your music out there, who the hell will?

These four artists are the first offerings from Singodd Records (and again, that’s Sing Odd, and not the Sin Godd deity I was pushing for), with their music seemingly coming out fast and furious in the last couple of months. (And I’ll have more to say about Singodd at the bottom of this piece).

Again, the artists are:

His new release is ‘Beats on the Bottom‘, and just a first listen in and it’s bloody addictive. A catchy beat, a memorable melody, and his vocals are stellar. I’m looking forward to hearing what his upcoming debut album will offer, as this one shows HUGE promise.

He also has a cool video for the song on YouTube that he has sadly disabled for embed on other sites, so you’ll have to check it out there. (His website here)

Conchita WURST — (I’ve written 750-plus articles about my main dude already, so no need for introductions)

Conchita has released two songs on Singodd Records so far — this summer’s ‘Malebu‘, a fun song that came with a brilliant summer song parody video I have watched repeatedly, and laughed at every time — and last month’s ‘Bodymorphia‘, another catchy dance song I’ve played 100 times this week alone. (watch the music vids for both below)

In a side note, I am hoping this means Conchita, aka Tom Neuwirth, has moved on from Sony Records with his Singodd Records signing, as I never felt they understood what he was trying to do with his music or gave him the promotion he needed/deserved to be able to do it.

But, I know Conchita’s manager André Karsai, and, if nothing else, he has and will always have Conchita’s best interests at heart at Singodd. And that’s half the bloody battle in anyone’s music career, isn’t it?

Anja Om — an amazing voice and so damned beautiful

I’ve watched Anja Om as Conchita’s backing singer at a number of her/his concerts. She has a superb voice and a cool presence.

Om released her first single ‘Get Out‘ back in July, which is a song I first heard and immediately got the feeling of ‘edgy Lylit‘ — you know, incredibly intelligent, beautifully written music from a strong woman who will never allow you to beat her down no matter how much you try.

Anja is also drop-dead-gorgeous in that earthy Lena Olin in The Unbearable Lightness of Being way I have always admired, so she’s just as interesting to watch as her music is to listen to. Check out her video to see what I mean. (And follow her on Facebook)

Fudl di Mare is a female group of singers who all take equal vocal parts in their work. They have phenomenal voices, they harmonize brilliantly together and they seem to love to poke fun at themselves and their music, if their recent music video ‘Palmen in Orlando‘ is anything to go by. (I freaking loved that!)

‘Palmen in Orlando‘ by the way is a damned banger and so bloody addictive, I’ve listened to it 10 times this morning alone.

Their latest catchy release on Singodd Records this week is ‘Anna Maria Island‘. Check both out below. (Follow them on Facebook).

Finally, this is what I like about Singodd Records, other than that owners Karsai and Meyer obviously didn’t let Austria’s never-ending and utter bullshit lockdowns plummet them into depression over the last year, but instead, got off their asses and created something cool.

As they say on their website about their record label’s commitment to their artists, among other things:

When SINGODD RECORDS releases your music, you can still do what you want with it. Because your work should belong to you, and it should be able to be heard on socials.

Hallefuckinglujah, because isn’t every artist sick to death of the power-hungry, iron-grip-fisted major labels whose main priority isn’t their artists and their control over the work they created, but instead the label’s own greedy bottom line?

Hell, for that alone, I’ll promote every musician Singodd Records puts out here on Leo Sigh as I am eternally supportive of people in the music industry who aren’t gigantic assholes to the artists that sign with them.

In other words, if you’re a musician looking for an indie record label whose management you won’t end up wanting to murder, Singodd Records could well be worth a look at.