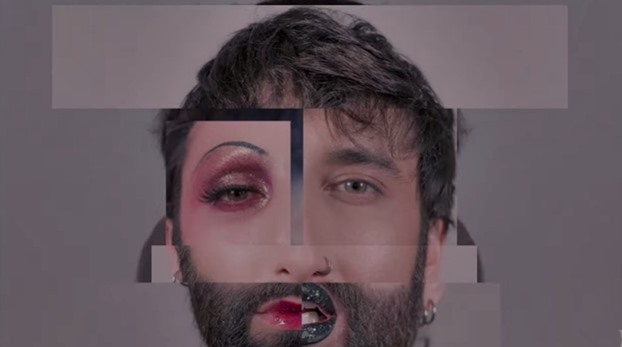 With no press release on Conchita Wurst’s ‘Bodymorphia‘ in my email box today, or anywhere else I can find for that matter, it’s difficult to know the background of ‘Bodymorphia‘. (listen to the song at the bottom of this long article)

I can tell you it was co-written by Conchita Wurst, aka Tom Neuwirth, and musician, multi-instrumentalist and producer Albin Janoska and that, apparently, a press release is on its way.


I can also tell you ‘Bodymorphia‘ continues Wurst’s narrative from long before she/he/whoever won the Eurovision Song Contest back in 2014.

The narrative that everybody should feel positive about their body. No matter who they are or what they look like. Because the only person who should have any say in their appearance is the person themselves.

Yep, I can get behind that.

Now, let’s get to Conchita Wurst’s ‘Bodymorphia‘ — a pounding disco-style electro-pop track that is the first song the Austrian artist has released since last April’s ‘Malebu‘.

And yes, apparently that’s ‘Sing Odd’ and not some weird Austrian deity I first thought it must refer to. You know, the Sin Godd.

Conchita Wurst’s ‘Bodymorphia‘ — is it good?

Well…the song itself is a banger. One that worms its way into your head until you are humming it while sat on the loo, as I just was.

But it’s the lyrics that really float my boat.

Lyrics written by Tom Neuwirth, and an interesting look into that man’s mind.

Because let me tell you, after seven years of following most of what that man does, I can guarantee it’s a scary place in there. But a place that’s a helluva lot more interesting than the space occupying most people’s heads.

As he says in ‘Bodymorphia‘ — “i drink a cup of purity to celebrate the times/dream away reality no borders on my mind“.

And isn’t that nice. Because, as much as I loved the iconic Conchita Wurst, her glamour, her beauty, her goddamn goddess-ness, I found her ultimately boring in most interviews. Uptight, controlled and desperate to get people to like her.

As she herself finally said, when she was as bored of her controlled self as I was:

“I was just an insanely stiff President’s wife. Today there are moments when I show someone the middle finger”.

Yep, I’ll take no borders on his mind any day than that. 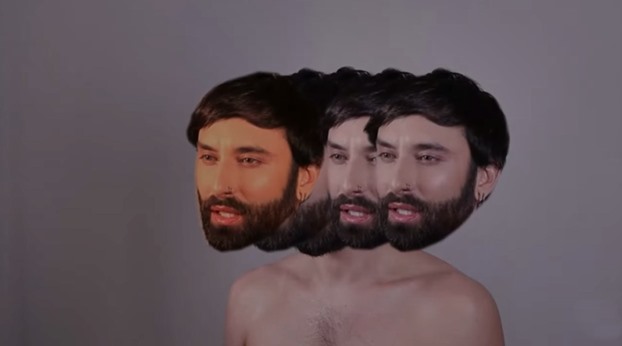 Tom Neuwirth’s lyrics are also interesting, in that they seem to speak to yet another change coming — “won’t give you time to approve all my needs/’cause you don’t know of the world in my dreams/and i’m ready ready ready to be seen again”

Ready to be seen again in another capacity other than Conchita Wurst, or WURST, or Tom Neuwirth?

Possibly. After all, this Austrian artist doesn’t let the grass grow under his feet before he morphs into yet another version of his multi-faceted and multi-talented self. Another version that would likely be as intriguing as every other one he throws at us.

(And this is why I have never been bored of Tom Neuwirth — although I do move away from him from time to time, I always seem to come back — because he is one of the rare artists who becomes as bored of himself as I would if he didn’t ever change. So, he digs deep into his complicated, complex and highly intelligent brain, and always comes up with something fascinating and new).

And, in that vein, the official music video for Conchita Wurst’s ‘Bodymorphia‘ went up on his YouTube channel half an hour ago. (watch it below)

A music video that could show how much a person with body dysmorphia sees the ugliness in themselves but, instead, is Tom Neuwirth’s way of saying “Embrace the ugliness, because God knows we all have it, and love every single part of yourself — because who you are is beautiful”.

Coming from someone who I have always thought is the most beautiful person — both inside and out — wouldn’t it be interesting then to know what parts of himself he perceives as ugly. As, fuck me, I’ve yet to find one.

And, on one final note, when I first met Tom Neuwirth way back before I moved to Austria because of him — in that interview where I made an ass of myself because, yep, we all sometimes do — subtle comments he made in that interview have stuck with me since, as they made me realize he sometimes believes he isn’t as intelligent as he is.

With the ‘Bodymorphia‘ lyrics, though, Tom Neuwirth continues to prove he is not only ridiculously intelligent, but that he has an ability to write lyrics that immediately create a vivid imagery in your head of the inner workings of his head. And, by the way, in a language that is not his first one. Now, that’s a gift.

Watch and listen to Conchita Wurst’s ‘Bodymorphia‘ in the song’s official music video and, on the Spotify widget, and, yep, the song itself is hella catchy.

Oh, and by the way, in two additional notes, ‘Bodymorphia‘ was originally written for the ARISE Grand Show at Friedrichstadt-Palast Berlin. Just in case you’re interested.

And I have another I think (?) 650-plus articles I’ve written about Conchita Wurst/Tom Neuwirth over the last seven years because, unfortunately for me, the Dude still rocks my socks like no other.