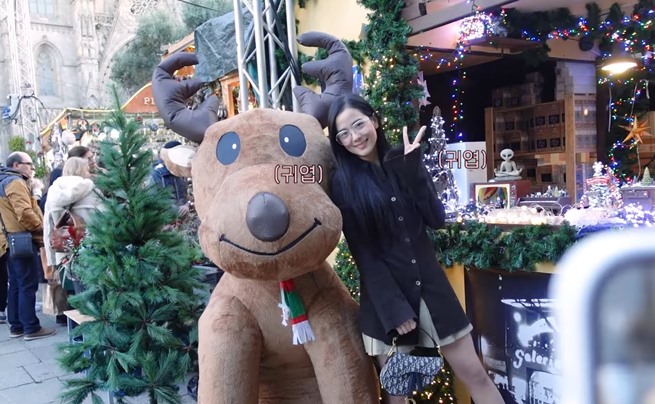 South Korean girl group Blackpink’s Jisoo kicked off her own YouTube channel last week with a vlog about her recent trip to London.

Today, Jisoos uploaded another very cute and funny vlog to the channel.


This time her vlog was filmed in Barcelona, Spain back in December and has the Korean singer heading to the city’s beach, to ride Barcelona’s famous ferris wheel at the Port Vell, stopping off at a Christmas market and finshing out her day by eating a delicious snack.

She’s like those Americans who go to Korea and eat their meals at McDonald’s! 🙂

Although, she did venture out to get one of Spain’s most famous and tastiest foods — churros. And even dipped it in the hot chocolate, just like a Spaniard.

One of the funniest scenes of the Barcelona video though was when Jisoo was shopping at the Christmas market, and Rudolph the Rednosed Reindeer died on her. (Watch it. I laughed out loud).

As in Jisoo’s last vlog, the Blackpink singer comes off as funny, incredibly cute and someone with a very sweet personality.

Watch Jisoo’s Barcelona vlog below. Just like her first vlog, any money she makes from the video will be donated to people who are less fortunate than many of the rest of us.

Something she is likely to be very successful at as, just a week into her YouTube channel, Jisoo already has close to three million subscribers and her Barcelona vlog, which was uploaded just six hours ago, has already had almost 700, 000 views.