It is always nice to wake up and see something new from Conchita WURST aka WURST aka Tom Neuwirth because, let’s face it, everything that lovely person does is pretty damned fabulous.

Case in point, this morning’s release of a surprise campaign Tom Neuwirth shot last year with Austrian underwear company SKINY. A campaign that, in now typical Tom Neuwirth style, is gender fluidity at its best.

Because this campaign is GORGEOUS — coming as it does with a beautifully shot video and stunning photos of Tom both as his feminine side, Conchita, his masculine side, WURST/Tom as well as an interesting mix of ‘Neither Here Nor There and Who Cares Anyway Because He’s Just So Damned Beautiful No Matter What He Wears or How He Appears’.


Three things stand out about Conchita WURST’s SKINY bodywear SKINYxWURST campaign though, and I’d like you to be aware of them as you spend time mesmerized by that man and his fabulous new photos.

Those three things are self-confidence, Inge Prader and SKINY themselves.

You know how, when you look closely at a photograph, if you are remotely intuitive you can pick up on how that person felt as that photo was being taken?

It’s the look in their eyes, the way their face is soft or stiff, the way they carry themselves, how they look at the camera defiantly or accepting —  their soul and how they feel about themselves does come through in a photo if you know how to find it.

Well, I’ve just spent six years staring at most of the photographs and videos Tom Neuwirth as Conchita Wurst and then WURST has had taken because, by doing that, I can see how he feels.

And that is why the new Conchita WURST SKINY bodywear campaign is so fabulous.

Because look at those SKINY photos and, if you know something about who that man is, you will see an enormous shift in his self-confidence since he won Eurovision back in 2014.

Gone is the look from back then that always seemed to me more defiantly self-confident than actually self-confident, and that hid the lack of self-confidence he didn’t want the world to see, tinged along with it as it was with his need for people to love him. While he seemed to struggle with truly loving himself.

And in its place in this SKINYxWURST campaign we now have this utterly beautiful and absolutely rock solid sense of self instead.

The sense of self of someone who knows who he is, knows what he wants, will do whatever the hell he wants with his career whether you like it or not, and is perfectly happy being male/female/neither/both depending on how he feels in that particular moment.

And, in the six years I have written about and analyzed Tom Neuwirth, if I ever wanted anything for him, it was what he obviously now has.

That Tom Neuwirth loves and accepts himself just the way he is.

Austrian photographer Inge Prader first popped up on my radar three years ago after she shot a stunning photo series of Conchita Wurst for the magazine News.

A series that, for me, was one of the first times I really saw just who Tom Neuwirth was underneath the back-then very beautiful but waaaaay too uptight and waaaaay too polite Conchita.

And what I loved about those photos from Inge Prader was that she, unlike many of the other photographers Tom Neuwirth has stood in front of over the years, saw who he really was and then brought that out in her photos.

She caught those fleeting looks of self-doubt, of pain, of anger at the world and the idiots in it — the rawness and authenticity too many other photographers missed while on their quest to just shoot ‘pretty’.

She caught the moments that, for me as a writer, are far more interesting than those that are candy box perfect but have nothing of substance to offer.

And, of course, with Conchita Wurst’s SKINY campaign, Inge Prader has done that again.

Her photo of Tom in nothing but a pair of SKINY briefs and a leather jacket, lounging on a chair and laughing, relaxed but still feeling slightly silly.

Or Conchita in high-heeled, thigh-length boots, wearing a black, lacy SKINY bodysuit and a fake fur coat looking as glamorous as hell but oh so sad.

The phenomenally beautiful photo of Tom on a Persian rug wearing a black camisole — male and female at the same time and someone whose heart has just been smashed into pieces, while the most belligerent cat you have ever seen sits by his side guarding his silver boots.

In all of these, Inge Prader has done something unusual. She finds where the person she is photographing hides their soul.

And then exposes it. 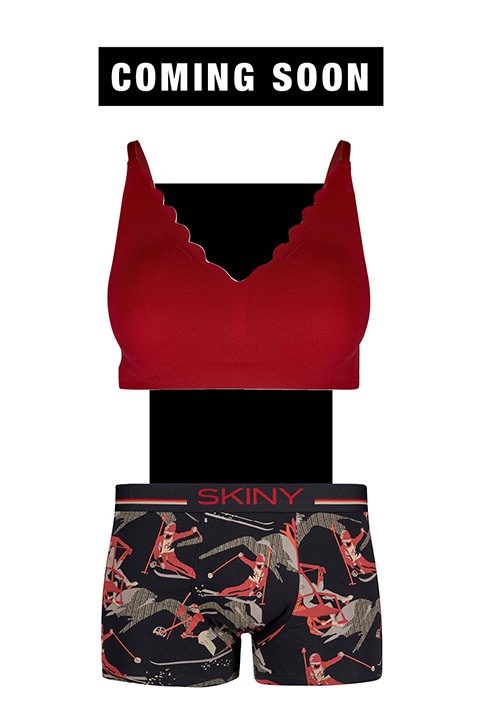 Even though I live in Vienna, Austria, I was not familiar with SKINY underwear until today. An Austrian family-owned brand that has, apparently, been in existence for over 30 years.

Then again, I am not really the company’s demographic because, as long as what I wear underneath my clothes is clean, I’m pretty much good to go.

That being said, SKINY is a brand I will definitely be looking for the next time I buy new undergarments as, let’s face it, a brand that is open-minded enough to not only hire Tom Neuwirth/Conchita Wurst but then to create a campaign showcasing exactly who he is and why he is so wonderful is a brand I would be happy to spend my money with.

As SKINY says in the campaign information:

In the Autumn/Winter season 2020 we offer a range complete for 24 hours of human multifacetedness. Together, with Tom Neuwirth, better known under his stage name Conchita WURST, we take you on a journey of blurring lines through a day in the life of Tom. Or Conchita. Or Wurst. No names, no labels, no gender. Not even a clear definition of under- or sleepwear.

We are in constant change. This season we underline that. So be someone who expresses themselves however they want. Because you are what you wear and you can change that at any given time of day. Dress by that rule, rather than by defined gender – or other boxes for that matter.

And it is that last line about ‘boxes’ where SKINY’s ‘Austrian-ness’ jumps out too.

Because as much as I have found Austria to be the most difficult country I have ever lived in predominantly due to the people living there, (love ’em, but Austrians sure as hell ain’t easy!), something I am fascinated with about Austrians is their very conservative outer elegance that hides a whole lot of kinkiness underneath.

A kinkiness that shows up in Conchita Wurst’s elegant but unusual SKINY campaign, a kinkiness SKINY themselves seems to be proud to embrace while they show off their utterly beautiful bodywear, and a kinkiness I absolutely adore.

You can check out that superb campaign from today on SKINY’s website, and also register for the company’s newsletter there. That way you will be informed as soon as all those lovely pieces Tom Neuwirth is wearing become available to buy, and you will get a 10% discount for signing up as well.

Now why do I think I’ll soon be seeing photos of Conchita fans wearing Tom’s underwear popping up all over Instagram?