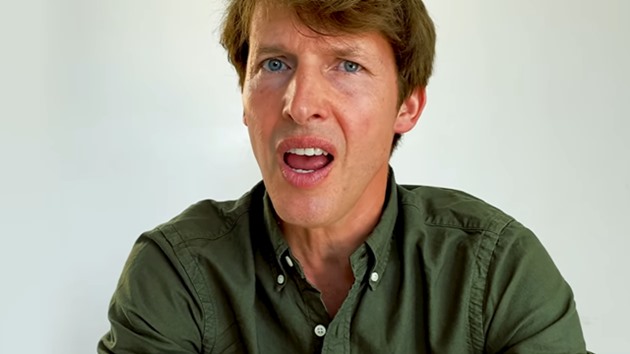 British singer James Blunt is certainly not letting lockdowns due to COVID-19 from stopping him from promoting his superb just released new album Once Upon A Mind (Time Suspended Edition). Nor from creating lovely music videos for songs from it.

Not when he has music, a camera and a YouTube channel.


Today, James Blunt’s ‘Happier‘ live acoustic session was released on YouTube — a 3-minute music video consisting of nothing but Blunt in front of a white wall singing the song and looking directly into the camera.

Singing as if he is singing to just one person — the woman he loves.

Blunt’s ‘Happier‘ live acoustic session video joins his official music video for another song from his new album — ‘Should I Give It All Up‘ —  which was released just a few days ago.

Unable to film a more complicated music video for that song due to COVID-19 lockdowns, Blunt filmed himself singing the song while driving down various country lanes.

Those clips were then interspersed with clips from several of his most popular music videos for other songs he has released over the last few years.

All together, they create a ‘Should I Give It All Up‘ video that is just as superb as if he had been able to film a proper music video.

James Blunt’s ‘Happier‘ live acoustic session video is similarly lovely. And also proves just what a talented artist Blunt is — that he can create the simplest possible music video and still make it touching and sad.

His new album Once Upon A Mind (Time Suspended Edition) is now available to download and to listen to on the usual digital platforms.

Related: James Blunt’s VEVO performances of ‘Monsters‘ and ‘The Truth‘ are lovely