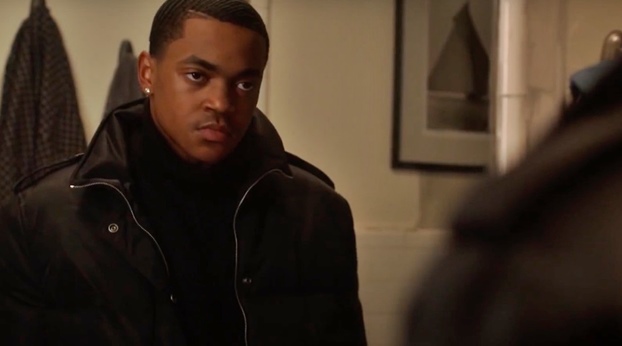 The track was played as Tariq notices Tommy Egan’s car.

50 Cent’s ‘Many Men (Wish Death)‘ is from the rapper’s debut studio album Get Rich or Die Tryin‘, which was released in 2003 via Shady Records, Interscope Records and Aftermath Entertainment.

It also charted on a huge number of other countries, including #1 in Canada, #2 in the UK, #3 in Belgium, Greece and New Zealand, eventually hitting the charts in 19 countries.

50 Cent’s ‘Many Men (Wish Death)’ was the third single released from the hit album.

The song only charted in the U.S., making it to #11 on the Bubbling Under R&B/Hip Hop Singles chart, but was eventually certified Gold with more than 500,000 units being sold in the U.S. alone.

The ‘Many Men (Wish Death)‘ music video, which was released along with the track, is based on the real-life shooting of 50 Cents in Queens, New York in 2000.

According to The Guardian newspaper, 50 Cent (aka Curtis Jackson), himself a former crack dealer was the target of a three-man hit squad after he wrote a song slamming drug lord Kenneth McGriff.

Listen to 50 Cent’s ‘Many Men (Wish Death)’ as played on Power Book II: Ghost last night in that music video. You can also hear the track on his debut album Get Rich or Die Tryin‘.