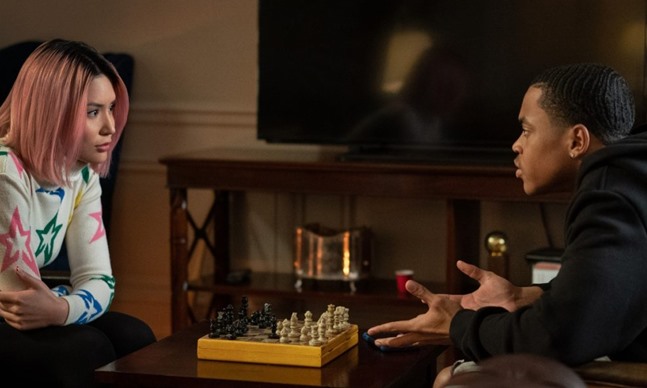 Canadian rapper, singer, songwriter Drake’s ‘0 to 100/The Catch Up‘ was one of the stellar songs heard on the soundtrack of the latest episode of Power Book II: Ghost last night.

The song was playing as Dru was walking into the dorm.

Drake’s ‘0 to 100/The Catch Up‘ was released as a standalone single that was released in mid-July, 2014. The track was a massive success for the rapper as, sales were so high, it was eventually certified Platinum in the United States with over 1 million copies sold.

It has also seen success on YouTube, with the various videos featuring the song gaining over 100 million views.

The song is a two-part track, with ‘0 to 100‘ a hip hop song that has Drake boasting he will go from 0 to 100 quickly just so he can pass all his competition.

The second half, ‘The Catch Up‘, reminds people that if the rapper hasn’t yet caught up with them, don’t worry, as he will be whizzing right past them any day now. (continue reading and listen to Drake’s ‘0 to 100/The Catch Up‘ below…)

‘0 to 100/The Catch Up’ was so popular, it eventually ended up being used for a Sprite commercial and also on the NBA 2K16 video game soundtrack.

It was also popular with critics, many of whom placed the song on their Best of 2014 lists.

Listen to Drake’s ‘0 to 100/The Catch Up’ (the explicit version) as played on the new episode of Power Book II: Ghost this week below.

The last half of the first season of Power Book II: Ghost kicked off last night on Starz.

Listen to Rhys Lewis’ ‘Hold on to Happiness’ from The Resident, Season 4, Episode 13

Listen to Elton John’s ‘Bennie and the Jets’ from Debris, Season 1, Episode 11