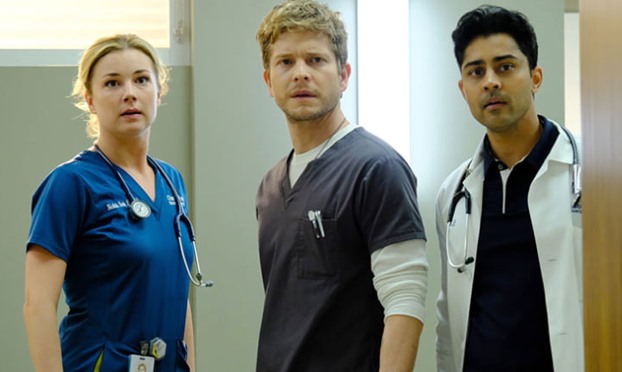 American electronic, soul, R&B singer songwriter Active Child, aka Patrick James Grossi, had a song licensed for play on the latest episode of the medical drama The Resident last night.

The gorgeous track was Active Child’s ‘Painted Staircase‘, and was heard on the soundtrack of The Resident, Season 4, Episode 5, “Home Before Dark“.

An episode that was pretty ridiculous in both its plot and its wrap up of that plot. (Honestly, The Resident has fallen so much in writing quality in recent weeks, for me the exceptionally good songs on its soundtrack are just about the only things saving it from becoming an ‘avoid at all costs’).

The song was heard during the montage as we see Chastain closing and then empty, and as Kitt and Randolph are walking around the hospital.

Active Child’s ‘Painted Staircase‘ is from the singer’s third studio album In Another Life, which was released in 2020 via Sony Music.

The album is one of several releases Active Child currently has available, including those three albums plus three EPs. (listen to Active Child’s ‘Painted Staircase‘ after the music promo…)

Listen to Thutmose’s ‘On The Run’ from The Resident, Season 4, Episode 3, “The Accidental Patient”

Along with his latest feature on The Resident, the New Jersey native’s music has also shown up on shows like Reign, Made in Chelsea (several times), Defending Jacob, Finding Carter, Arrow, Teen Wolf, CSI: NY, 90210 and So You Think You Can Dance.

Listen to Active Child’s ‘Painted Staircase‘ in the song’s audio video below, and on his album In Another Life.

The beautifully mysterious and ethereal track was also featured in the trailer for Defending Jacob.