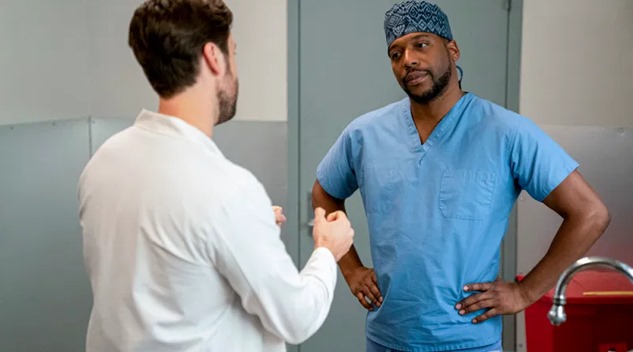 The track was heard as we see Dr. Floyd beginning to work on a solution to save Kapoor’s life.

Andrew Bird’s ‘Three White Horses‘ is a track from the artist’s seventh studio album Hands of Glory, which was released in 2012 via the Mom+Pop Records label.

Along with its appearance on New Amsterdam, the song has also been licensed for play on hit series like The Astronaut Wives Club and This Is Us.

‘Three White Horses‘ is not the first, nor likely the last, song Andrew Bird has had featured on TV series either.

His songs have shown up on a huge number of shows in recent years, including The Path, The Young Pope (many songs), Casual, Orange is the New Black, Parenthood, Little Women, Dickinson, Royal Pains, The Good Wife, One Tree Hill, Private Practice, The Living and the Dead and Billions.

Bird himself has released 16 studio albums, more than half a dozen live albums, at least 10 EPs and a large number of singles.

He has also appeared on albums by musicians as diverse as Squirrel Nut Zippers, The Verve Pipe, Kelly Hogan, Ani DiFranco, My Morning Jacket, Dosh, and Bobby Bare.

Listen to Andrew Bird’s ‘Three White Horses‘ from last night’s New Amsterdam in the track’s official music video, as well as on his 8-track Hands of Glory album.