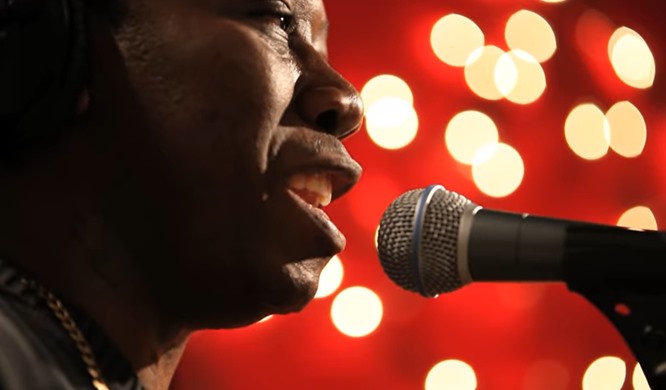 Honduran musician, singer (and, interestingly, politician) Aurelio’s ‘Tio Sam‘ was one of the tracks played on the new episode of the Apple TV + documentary series Long Way Up this week — Long Way Up, Season 1, Episode 10, “Nicaragua, Honduras, Guatemala & Mexico“.

The song was heard during the scene at the volcano in Nicaragua.

Aurelio’s ‘Tio Sam‘ is from the Honduran artist’s album Laru Beya, which was released in 2011 via Sub Pop Records/Stonetree Records, and is a song about the United States (Uncle Sam) and its treatment of people.

His superb album Laru Beya features songs all centering around the Garifuna rhythm. A unique rhythm and sound that comes from the African and Caribbean Indian roots of his slave ancestors.

Every song on the album, including ‘Tio Sam‘, though, is also tinged with the loss of his close friend and Garifuna musical icon, Andy Palacio, who died unexpectedly at the age of only 48.

The songs on the album were written and recorded beginning just a month after Palacio’s death, but Aurelio felt it needed to be that soon as he wanted to create something that honored the life of his friend. (article continues below…)

You can learn more about the album and Aurelio on the Sub Pop Records website.

Listen to Aurelio’s ‘Tio Sam‘ in the video below and on his album Laru Beya, which you can listen to in full in the Spotify widget below that.

There is also a fabulous live performance of the track Aurelio gave on the Seattle, Washington radio station KEXP back in 2011 you should also watch below.