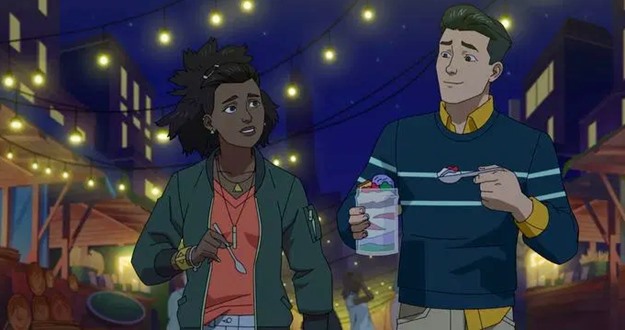 American R&B pop singer songwriter Bazzi’s ‘Paradise‘ was one of a couple of sweet songs featured on the soundtrack of the newest episode of the Amazon Prime show Invincible last night — Invincible, Season 1, Episode 4, “Neil Armstrong, Eat Your Heart Out”.

The song was played as Mark takes Amber home after their fairground date, and was a lovely choice due to its exuberant feel matching that scene.


Bazzi’s ‘Paradise‘ is the lead single from the Michigan native’s 11-track mixtape Soul Searching, which was released in 2019.

The song charted in 14 countries including Belgium, Ireland, Lithuania, Norway, Canada, the U.S. and the United Kingdom, and ended up being certified Platinum or x Platinum in Canada, Brazil, Australia and the U.S.

Listen to Run the Jewel’s ‘Don’t Get Captured’ from Invincible, Season 1, Episode 4

The song’s official music video was also released on the same day as the single and features Bazzi singing in a park, accompanied by a string quartet or hanging out with a group of beautiful girls at a swimming pool, while various couples kiss, hold hands or hug.

Listen to Bazzi’s ‘Paradise‘ as played on Invincible in that music video and on the singer’s mixtape Soul Searching.