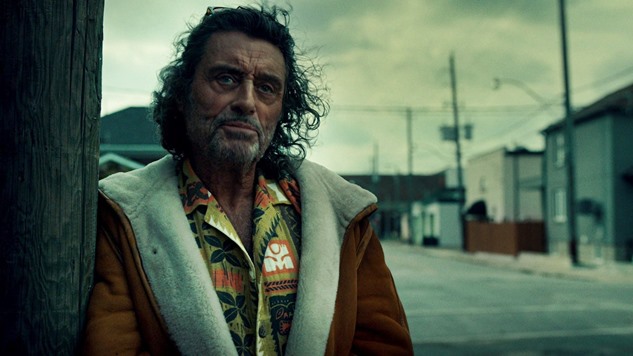 The eerie but utterly beautiful song was heard as Laura (Emily Browning) is trying to revive Mad Sweeney (Pablo Schreiber). Right before she disintegrates into dust.

Beth Whitney’s ‘Raven‘ is from the singer’s album The Wild Unrest, which was self-published by Whitney in 2017.

The Pacific Northwest-based singer herself began performing professionally, when she and upright bassist Aaron Fishburn got together as a musical duo — The Banner Days.

The pair released their debut album, Leave Your Shoes, in 2007, followed by Whitney spending much of the next decade as a solo performer. Although, since 2008, she and Fishburn were also married.

Nowadays, the pair are concentrating on solo careers, while also performing as a duo where they can. (continue reading and listen to Whitney’s ‘Raven‘ after the promo for another song from the same episode….)

Listen to The Dead South’s ‘In Hell I’ll Be in Good Company’ from American Gods, Season 3, Ep. 1

As for Whitney’s ‘Raven’, it is the second time the song has been licensed for a hit TV series, having been played on Wynonna Earp back in 2018.

The song is so unusual and lovely, don’t be surprised if it appears on more as time goes on.

Listen to Beth Whitney’s ‘Raven‘ as heard on this week’s American Gods in both the song’s equally haunting and eerie music video and on her album The Wild Unrest.

The first episode of Season 3 of American Gods, plus Seasons 1 and 2, are now streaming on Starz.

You can learn more about Beth Whitney on the singer’s official website.