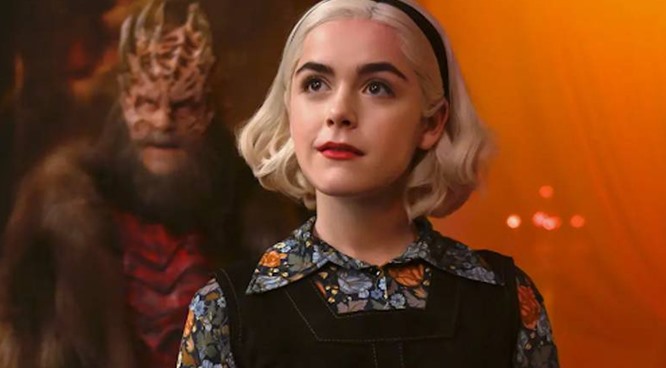 The song was heard playing as Sabrina is, indeed, dancing with herself.

Billy Idol’s ‘Dancing with Myself‘ was first released by the British punk rock band Gen X in 1980. A band that, at the time of the song’s release, Idol was its lead vocalist.

The track was not a huge success for the band, however, and not long afterwards they broke up.

Idol then re-released the song a year later as a solo performer. In its second release, it became much more of a dance number with the bass and guitar being toned down and Billy Idol’s voice more prominent.

The song ended up charting in the U.S. at #27 on the  Hot Dance Play Chart, as well as making it to #9 on the New Zealand Singles chart and #39 on the Canadian Top Singles chart.

It also ended up kicking off Billy Idol’s career in the U.S. as the music video for the song became one of the most popular videos on MTV. (continue reading and listen to Billy Idol’s ‘Dancing with Myself’ after the promo below…)

Listen to The Zombies’ ‘Time of the Season’ from Chilling Adventures of Sabrina, Season 4, Ep. 1

A year afterwards, when Idol released Rebel Yell his second studio album, he was already a well-known singer in the indie scene in the United States. Rebel Yell then became a huge commercial success.

One of his latest releases in 2020 was as a guest vocalist on Miley Cyrus’ song ‘Night Crawling’.

Listen to Billy Idol’s ‘Dancing with Myself’ as heard on Chilling Adventures of Sabrina this week.

The final season of the supernatural horror series is now streaming on Netflix.