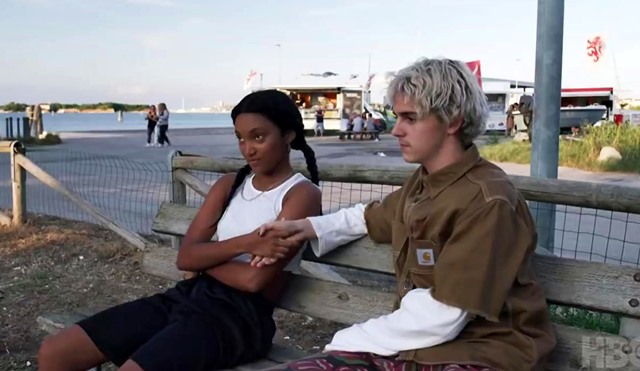 The song was the track Fraser and Caitlin were listening to on their phone.

Blood Orange’s ‘Time Will Tell‘ is from the singer’s sophomore album Cupid Deluxe.

That album was released in late 2013 via British indie record label Domino, and includes collabs with artists like Despot, Caroline Polachek and Samantha Urbani.

Blood Orange, aka Dev Hynes, started out his career as a musician as a member of the dance punk band Test Icicles, where he both played guitar and sang.

Two years into that project, Hynes decided to go solo, first under the moniker Lightspeed Champion and then as Blood Orange.

In the last 10 years, the British singer songwriter, and now music producer and director, has released a total of five albums as Blood Orange, with his latest Angel’s Pulse being released in July last year.

The singer has also become known for his work writing or producing music for such icons as Mariah Carey, Kylie Minogue, Florence and the Machine, Carly Rae Jepsen and FKA twigs.

Listen to Blood Orange’s ‘Time Will Tell‘ as featured on We Are Who We Are in the song’s official music video below.

The video begins with Blood Orange at the piano in a music studio and then continues as he stands up and begins to dance, almost as if he is trying out various moves for another video.

We Are Who We Are is based on an original idea by Italian writer Paolo Giordano, and is currently airing on HBO with five more episodes in the first season due to be released in coming weeks.