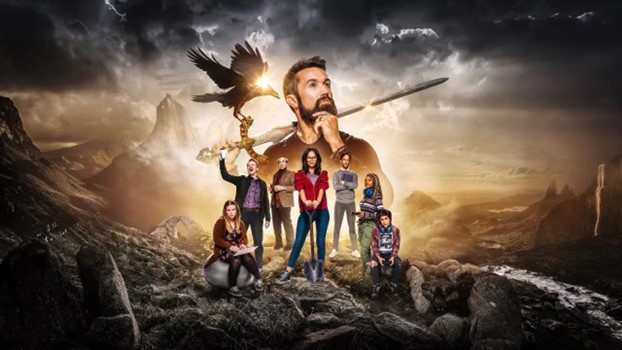 The upbeat, fun pop song was played over the episode’s end credits.

Broods’ ‘Everything Goes (Wow)‘ is from the duo’s third studio album Don’t Feed the Pop Monster, which was released in 2019 via the Neon Gold and Island record labels.

The track was the second single from the 12-track album, and was said to have been recorded by the indie duo in a Nicaraguan tree house.

While not an enormous hit for the artists’, Don’t Feed the Pop Monster charted in both Australia and New Zealand.

Broods‘ music has also been quite popular with TV show music supervisors over the last few years, and has been featured in TV series like Grey’s Anatomy (many episodes), Reign, Catfish: The TV Show, Teen Wolf, The Challenge, Supergirl, The Vampire Diaries, Beauty and the Beast and Black Ink Crew.

Listen to Broods’ ‘Everything Goes (Wow)’ as heard on Mythic Quest: Raven’s Banquet on the band’s Don’t Feed the Pop Monster album, and on the song’s official music video.

The video is a series of shots repeated over and over again. A video fans either love or hate (I’m in the latter camp).