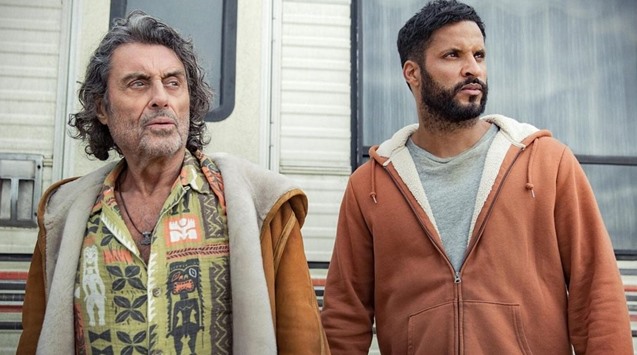 The track was heard as Shadow Moon and Odin are traveling together, and then as Shadow Moon finally heads off to the prearranged hideout of Lakeside. Much to Odin’s happiness.

Canned Heat’s blues-rock song ‘On The Road Again‘ was first released in January, 1968 on the band’s sophomore album Boogie with Canned Heat. It was then re-released in a slightly shorter radio-friendly version as a single.

The track eventually charted in 11 countries, including in the United States, the UK, Australia and Canada, and ended up becoming the biggest hit in the band’s career.

So popular was it, it was re-released on various compilation albums the band produced over the next few years. (continue reading below…)

Listen to The Dead South’s ‘In Hell I’ll Be in Good Company’ from American Gods, Season 3, Ep. 1

The song has also been featured in the TV shows Wolf Creek and Wanted, as well as in the German road movie Alice in the Cities  (aka Alice in den Städten) and in the films Sahara and Red 2.

Listen to Canned Heat’s ‘On The Road Again‘ in a cool live performance of the song at Woodstock in 1969. You can also hear it on the band’s 1989 album of the same name below.