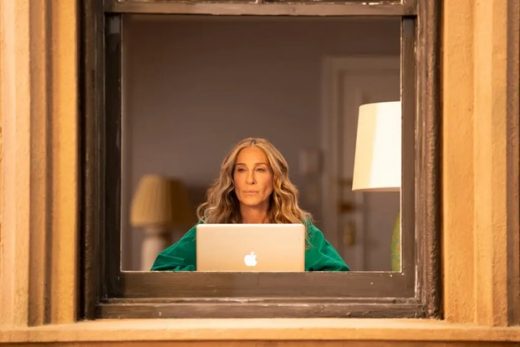 The melancholic song was heard during the episode’s opening, as we see Carrie working on her laptop as day becomes night and the seasons change

Carly Simon’s ‘Spring is Here’ is from the American singer songwriter’s 10th studio album Torch, which came out in August, 1981 on the Warner Bros. record label.

The album was made up of all cover songs, except for one original.

That includes Simon‘s version of ‘Spring is Here’, which was written by iconic songwriting time Rodgers and Hart back in 1938 for the musical I Married an Angel.

Related: Listen to Billie Eilish’s gorgeously sexy ‘Billie Bossa Nova‘ from the same And Just Like That… episode

Between its first release and Simon’s, ‘Spring is Here‘ had also been recorded by Tony Bennett, Miles Davis, Vic Damone, Julie London, Ella Fitzgerald, Frank Sinatra and several other luminaries.

Simon’s version of ‘Spring is Here‘ was recorded during the time she was going through a divorce from then-husband James Taylor, so the melancholy is to be expected.

Torch, the album it appeared on, was critically acclaimed.

Listen to Carly Simon’s ‘Spring is Here‘ from last night’s And Just Like That... on her 11-track album Torch, and in the video.

You can also check out the song’s lyrics on Simon’s official website.